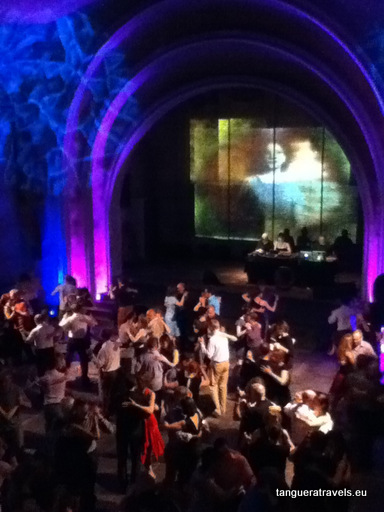 I am posting this MUCH later than expected but it is also the longest post I’ve written here so far. It is difficult to do justice in words and pictures to the many wonderful moments I experienced during ten intense days and nights of dancing tango in Berlin but I will try by sharing some of them with you below …

I was staying in Berlin during the Embrace Tango Community Festival. Embrace is different from traditional festivals as there is no central organiser. Tango schools and milonga organisers in Berlin invite teachers, DJs, orchestras etc themselves and publish all the events in a common programme. The advantage is a huge number of events by different organisers all over the city of Berlin over a period of ten days. The disadvantage is that it is not possible to buy a festival pass and that you need to pay separately for each event, which can work out rather expensive. During my stay I attended a mix of Embrace and regular milongas (some of which took place at the same time of the festival). Obviously I’m only writing about the ones I actually went to, and therefore a fraction of what was on offer.

For my first Berlin milonga I met a friend at Café MadaMe. We decided on this one because there was going to be live music. The venue is very small with an improvised dance floor between the tables and chairs. Five couples on the dance floor would already have been a crowd. There weren’t many people though, so this was not really a problem. Most of the time there were maximum three couples dancing. The atmosphere was very relaxed and people were mostly dressed casually.
Live music was by Javier Tucat Moreno who played two sets during the evening. I would recommend this milonga rather for listening to the music than for dancing.

The milonga here is not held regularly. Check Javier’s website or the facebook page of Café MadaMe for up to date information. Although I had been warned that Nou could be very “cliquey” and difficult for outsiders to get dances I decided to go on Friday for three reasons: there was going to be live music by Orquestra Pasional, an orchestra from St Petersburg, there was an open class before the milonga and the venue itself was close to where I was staying.

The open class was very friendly and it was not a problem to be without a dance partner. We had an almost evenly balanced group, so I was dancing for most of the lesson.

By contrast, the milonga lived up to its cliquey reputation and I only danced one tanda the entire evening. The music was incredible though 🙂

This is a seasonal, open air milonga in central Berlin, organised a couple of times a week between May and September. Other music is played apart from tango, so check the website for the programme. It was an incredibly hot Saturday afternoon when I went. Too hot to tango, so I spent most of my time taking photos. I was particularly impressed with the number of couples who colour coordinated their shoes 🙂 Most of the pictures you see in this post were taken in Monbijou Park. It’s also a really lovely place to go for a walk! I went to Urquiza with Laura, my host and a Berlin tanguera. I found this to a really friendly milonga and ended up dancing the most I had since I arrived in Berlin. This could have been partly because she helpfully pointed out cabeceos which I would have been oblivious to otherwise … Claerchens is a Berlin institution, a pub/restaurant with a ballroom which has been going since the beginning of the last century. If the place seems familiar, perhaps you recognise it from films such as Inglorious Bastards or Stauffenberg. You can dance every night of the week in Claerchens, and Tuesday is tango night. For the full programme, check their website.

As this was the only Tuesday I was going to be in Berlin, I decided to go to Claerchens and skip the opening night of the Embrace Festival in the Musikbrauerei. The atmosphere was relaxed and friendly, the level of dancing rather mixed but overall a good night out and I’ll definitely be back next time I’m in Berlin! This was the first Embrace event I went to, but it is also a regular milonga which takes place every Wednesday. It’s actually one place I remember dancing all those years ago when I was studying in Berlin. The venue lives up to its name and there are several little alcoves around the dance floor with places to sit. As it is quite dimly lit, it can be difficult to successfully cabeceo if sitting in one of the alcoves, especially when it gets crowded. The bar area is therefore a better place to hang around if you want to get dances.

This was a special event for the Embrace festival, the highlight of my stay in Berlin and possibly my tango travels. It truly was the most spectacular place I have ever danced in. The Delphi used to be a silent movie theatre during the 1920s, but closed its doors in 1959. Today it is only open to the public for events and it is well worthwhile checking if there is something on while you are in Berlin, just to see what it looks like inside. For information on upcoming events, check their website.

But back to the milonga. Here is a short video I shot from the gallery, to give you an impression of the atmosphere:

As you can see, the tanda was complemented by clips from silent (including tango) movies which were synchronised with the rhythm of the music. This went on throughout the milonga and even included the cortinas. It was the first time I ever attended a milonga with a VJ and it was quite special! You can get an even better idea by looking at this video of the VJ/DJ Pierre M.

The last milonga of my stay was an Embrace event, but it is also organised as a regular milonga by the school “Tangotanzen macht schön” (literal translation: dancing tango makes (you) pretty”). At one point during the evening there was a “Tausch Tanda” (swap tanda), where dancers were encouraged to change partners at the end of each song. Reading the information on their website this is also part of the regular Friday milonga and generally takes place at 22:45. Such a great way to integrate newcomers and visitors! One of the highlights of the evening was the performance of Dana Frigoli and Adrian Ferreyra which you should be able to see via the link below, along with the other amazing performances! I finished the tango part of my trip to Berlin with an intensive milonga and vals course at LaBerlinesa which was taught by Daniela and Raimund. These two types of tango are hardly ever covered in the classes I normally attend so I was really looking forward to it. I really liked their style of teaching and the focus on musicality. By the way, in case you are new to tango and don’t know what I’m talking about, vals is like the classic ballroom waltz, incorporating tango elements with lots of turns, while milonga is a faster, “happier” version of tango with a strong accentuated rhythm. You can see an example of a milonga here and vals here.

I haven’t danced tango so intensively for a long time and I really feel it has helped my dancing a lot. Staying with a local tanguera also made it easier to find my way in the Berlin tango scene. I will definitely be back in 2017 … For videos of some of the performances during the festival check out this youtube playlist by 030 Tango.

The Embrace Tango Community Festival takes place every year in Berlin. The next one will take place 30 May – 6 June 2017. Keep an eye on their website for information about the programme in the coming months.

Looking for general information on tango in Berlin? Check out my top five tips for getting the most out of your tango trip. The tango scene is incredibly active there so any time is a good time to visit!

Were you at the Embrace festival this year? Where is your favourite place to dance tango in Berlin? As always, I’d love to hear from you in the comments below!