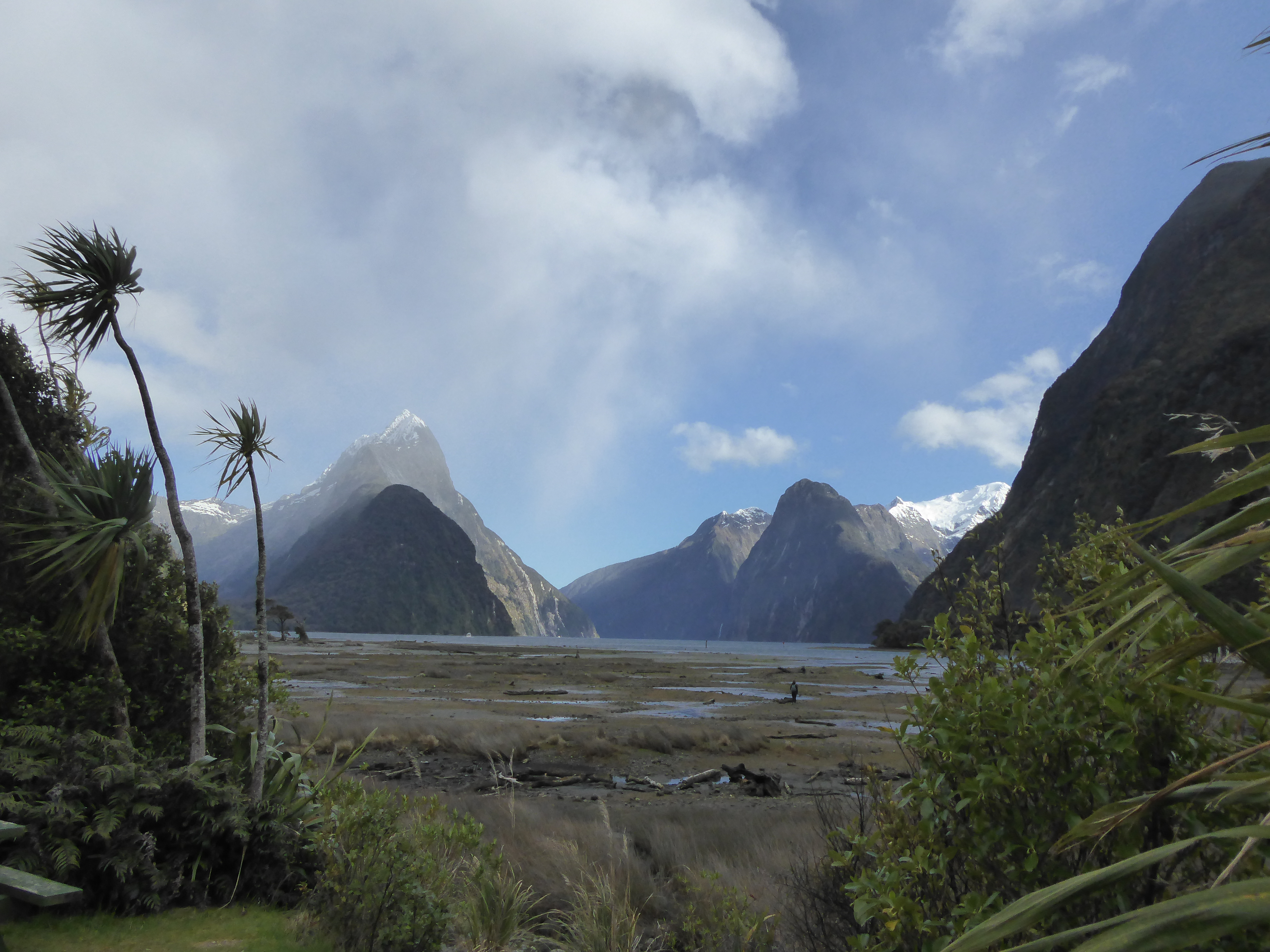 Queenstown to Milford Sound via the glowworm caves of Te Anau …

When I was planning my trip to New Zealand, one thing I definitely wanted to do was an overnight cruise along one of the sounds of the south island. In the end, I booked a cruise on the Milford Sound which despite its name is actually a fjord. For those interested in the difference: sounds are formed when a river valley is flooded by the sea or when the land sinks, whereas fjords are formed by the erosion of glaciers.

In the weeks leading up to the trip when I had images in my head of what New Zealand would be like, it was mainly of being on a boat; moving slowly and silently through one of those sounds (or fjords), surrounded by mountains on either side, from which tiny waterfalls flowed down into the water below. You know, like the Argonath scene in Lord of the Rings except, I hoped, with a bigger boat… 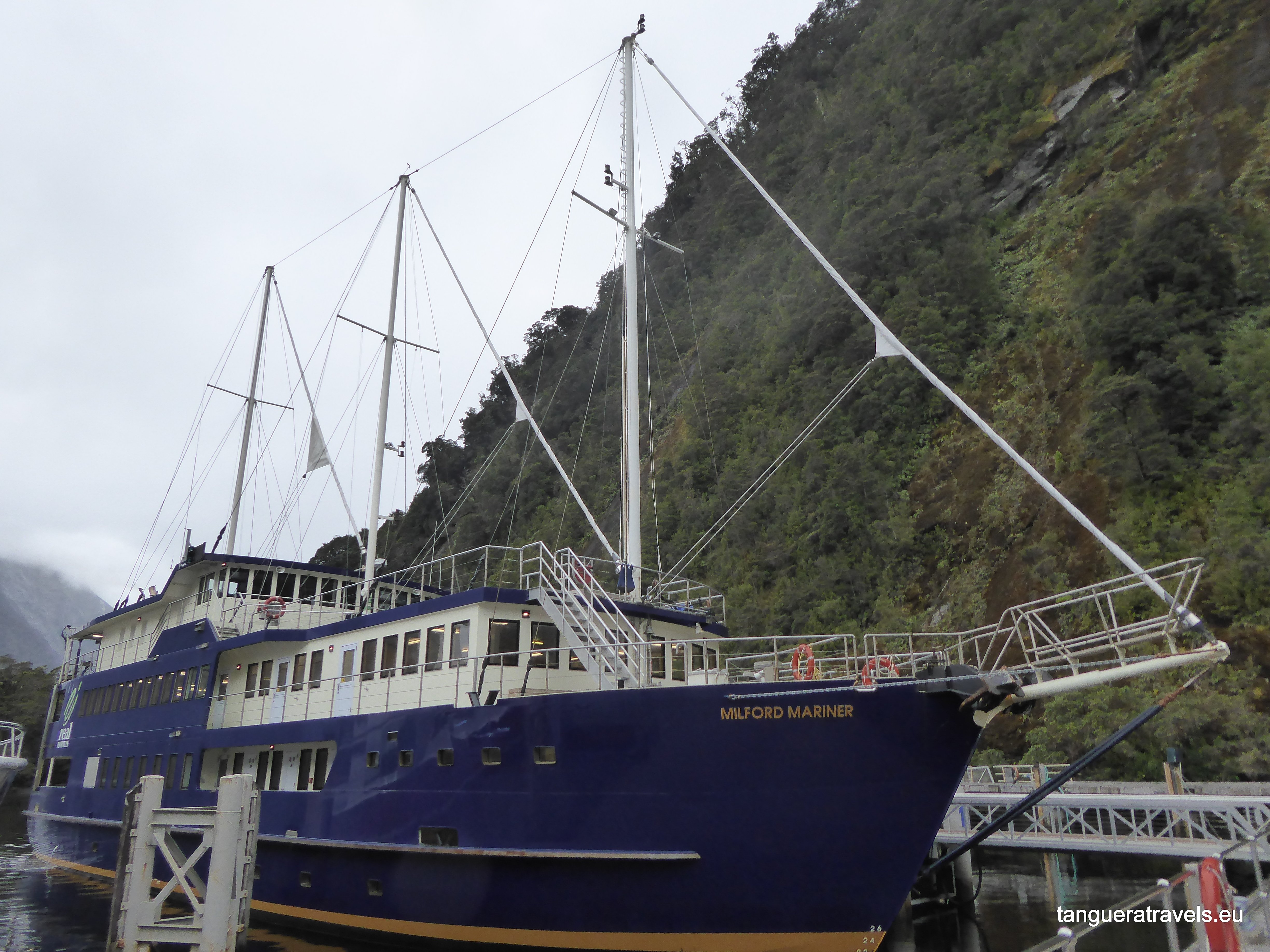 My New Zealand adventure began in Queenstown, with sunshine and 15°C, which was much warmer than I had expected. We went up on the Skyline Gondola to admire the view. As I looked out over Lake Wakatipu, I thought this was a perfect start to the three week journey. 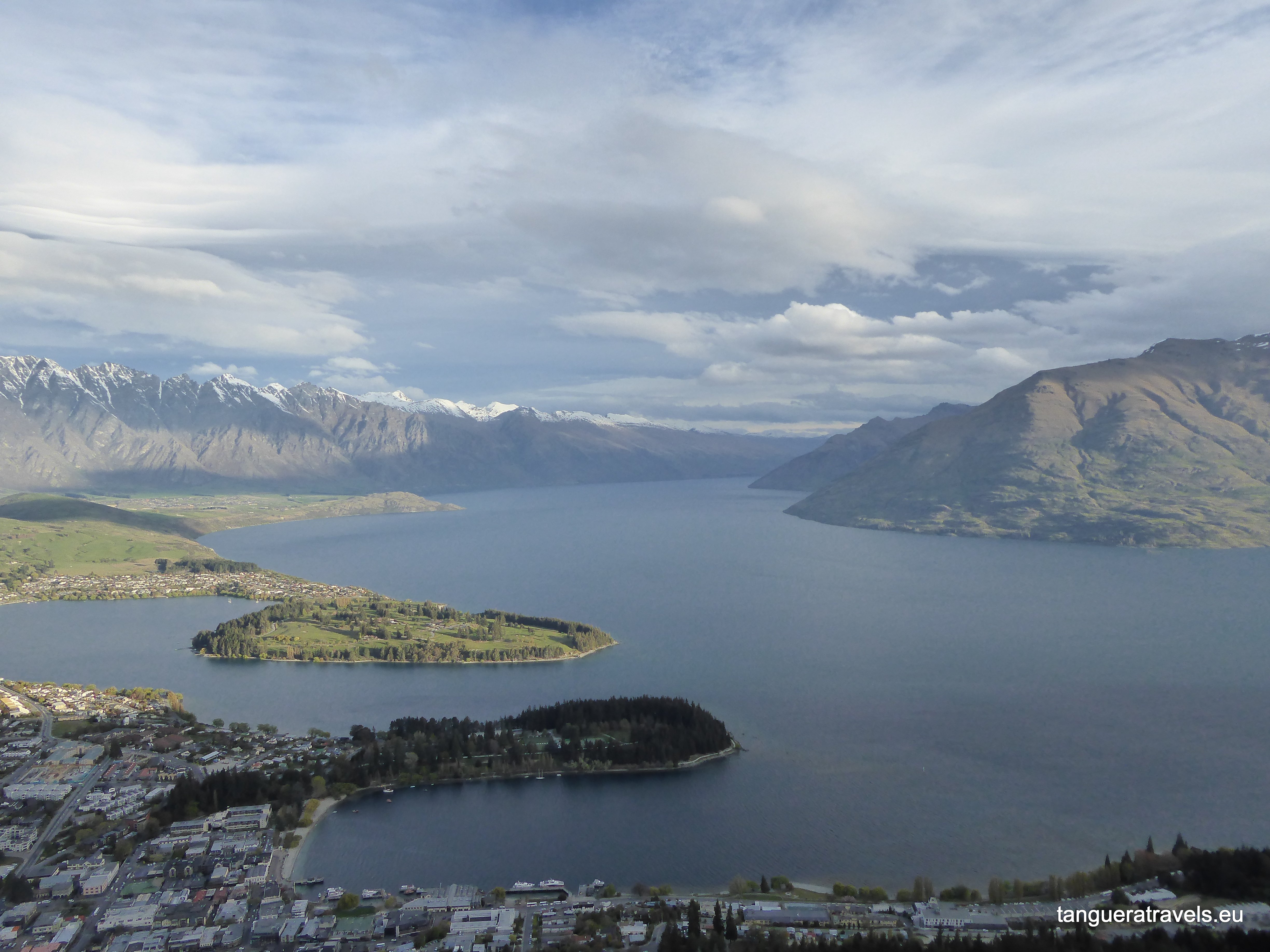 By the next morning the temperature had dropped dramatically. As we sat in the bus to Te Anau, about two hours from Queenstown, snow flakes swirled in the wind outside. On arrival, we were told that we might not be able to get to Milford due to heavy snow fall and risk of avalanche. There would be more news the following morning.

The snow had stopped by the time we reached Te Anau, but the air was chilly, the skies were grey and fog hung low above the lake. It was really, really quiet and there was no one around. If I ever write a ghost story, I think I’ll set it here. 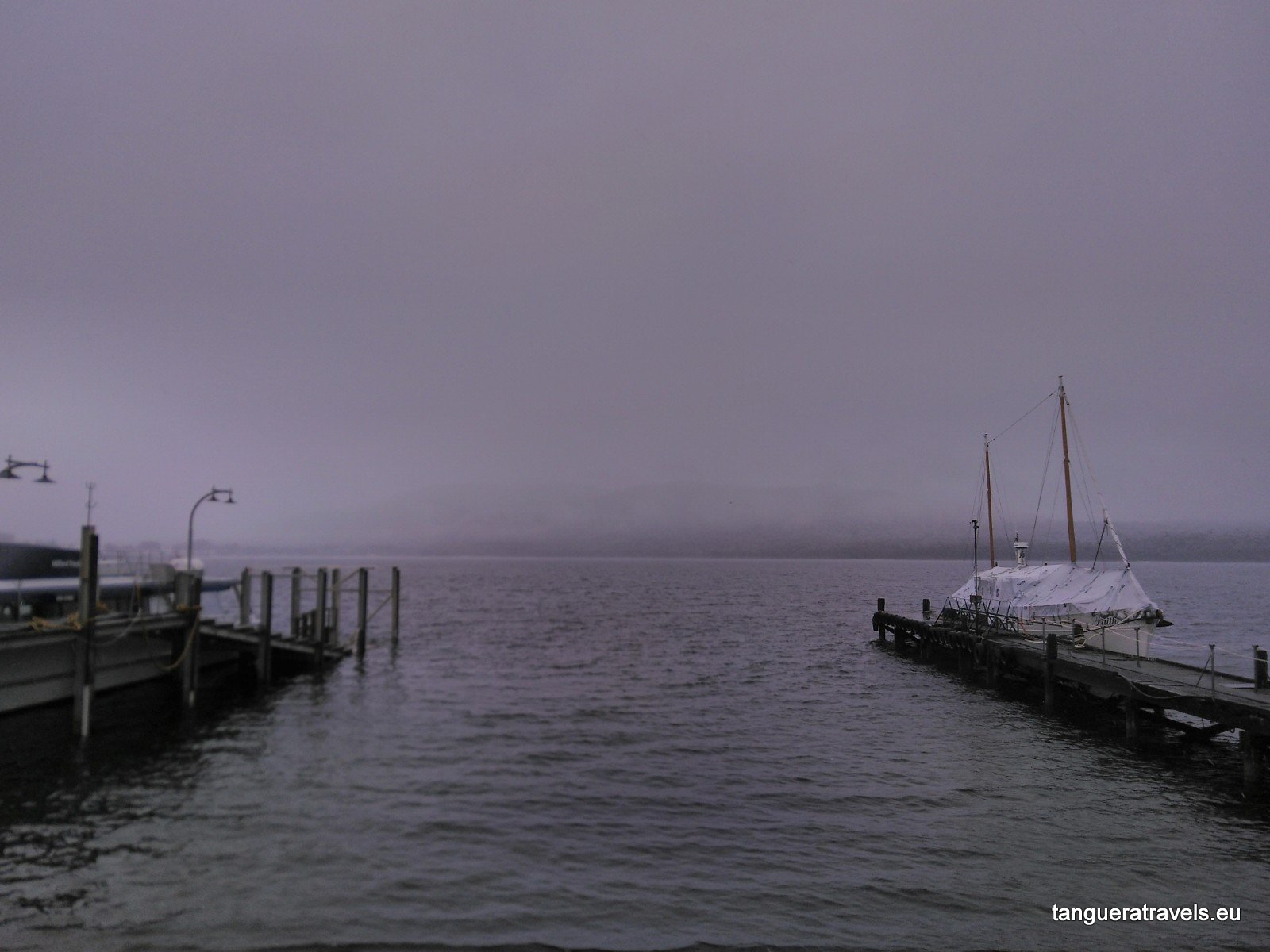 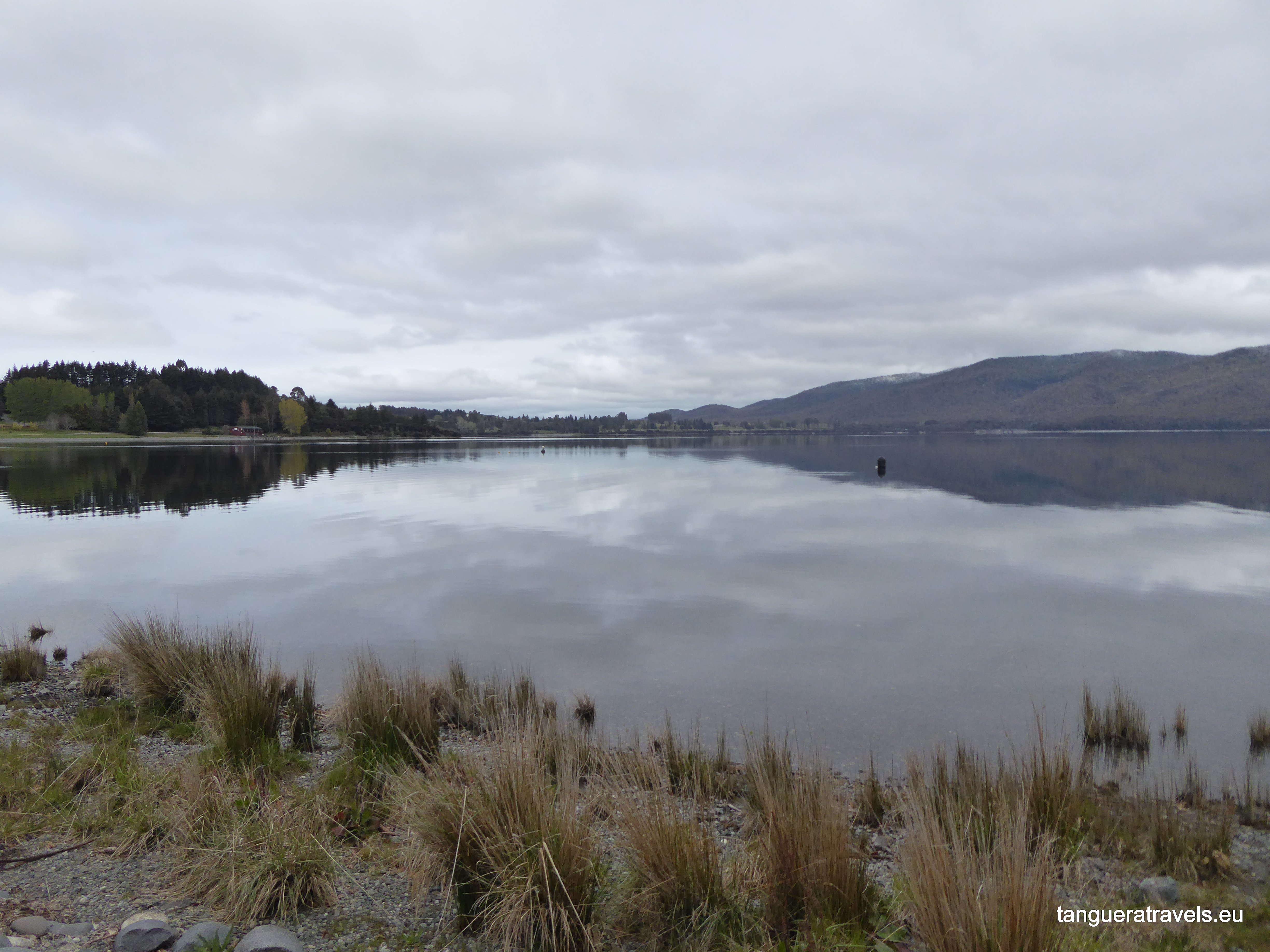 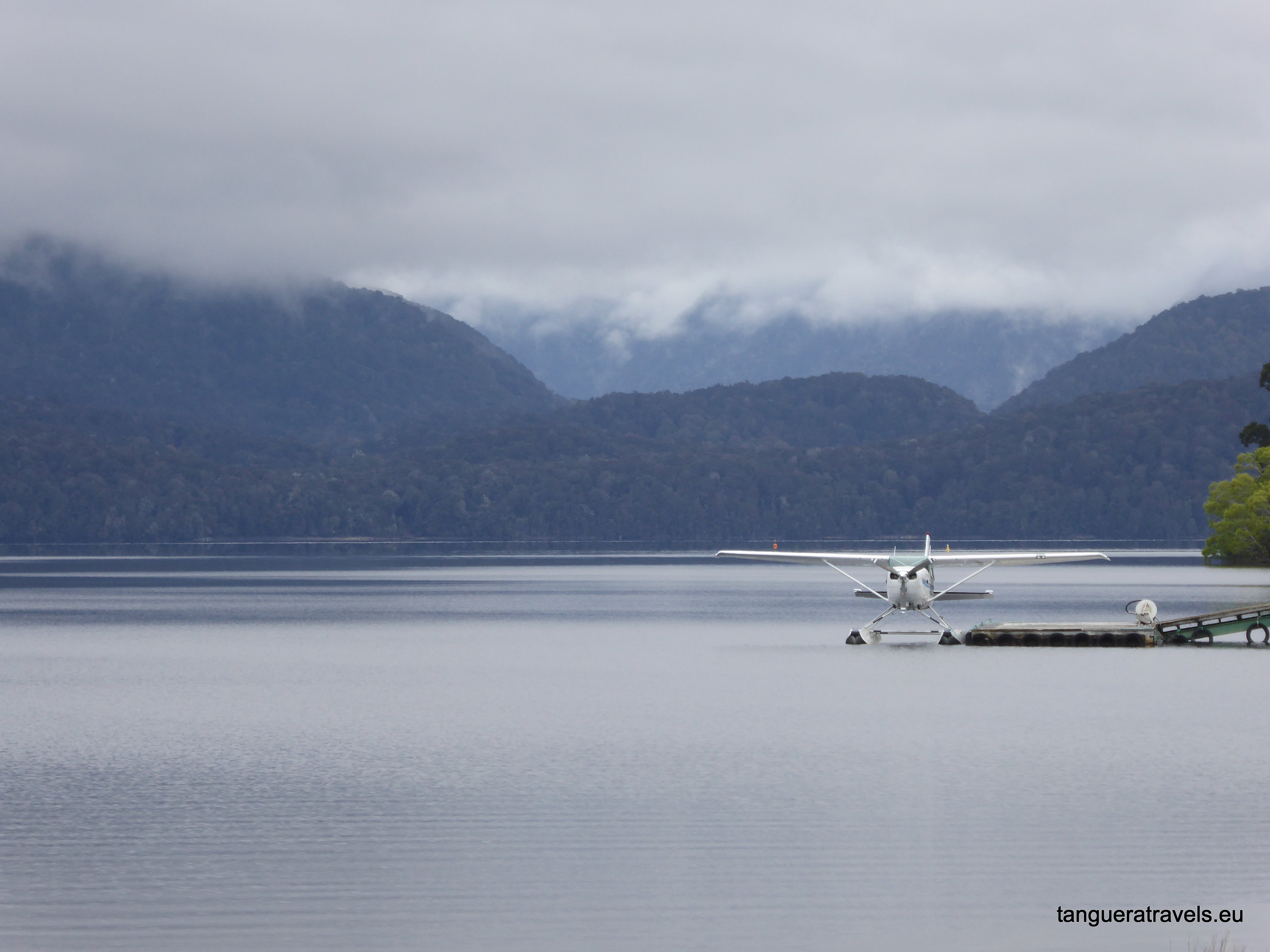 We decided to pass the time by going on a tour to the nearby glowworm caves. It was getting dark by the time we got on the boat that carried us to the western shore of Lake Te Anau, New Zealand’s second largest lake after Taupo. The Maori name for the limestone caves where the glow worms live, is Te Ana-au, which means the swirling cave. The caves are around 12,000 years old which is considered young in geological terms. They continue to be shaped by the swirling waters that pass through them and gave them their name.

Once we got off the boat, we were split into groups before being guided into the caves. We had to duck down as the ceiling was so low for the first part of the tour. We emerged into a higher space with the sound of running water around us. After seeing the whirlpool we were led to where the caves have their highest point, the Cathedral. We walked along a secured metal walkway, following our guide further into the caves.

The final part of the tour was on a small boat, which brought us into the grotto where the glowworms were. The dimly lit gloom of the caves soon turned to pitch black. I could not even see my hand in front of my face. Everyone was completely silent, which I think has never happened to me on a guided tour before. Tiny dots of blueish light danced above us. It was a bit like looking at tiny stars in the sky. I had no sense of how long we stayed there. It was such a strange, peaceful experience.

We weren’t allowed to take any photos inside the caves, but if you want to have an idea of what it’s like, you can see some photos on the Real Journeys website here or here.

Te Anau isn’t the only place for seeing glowworms in New Zealand. For other places on both the South and North islands have a look at this website. 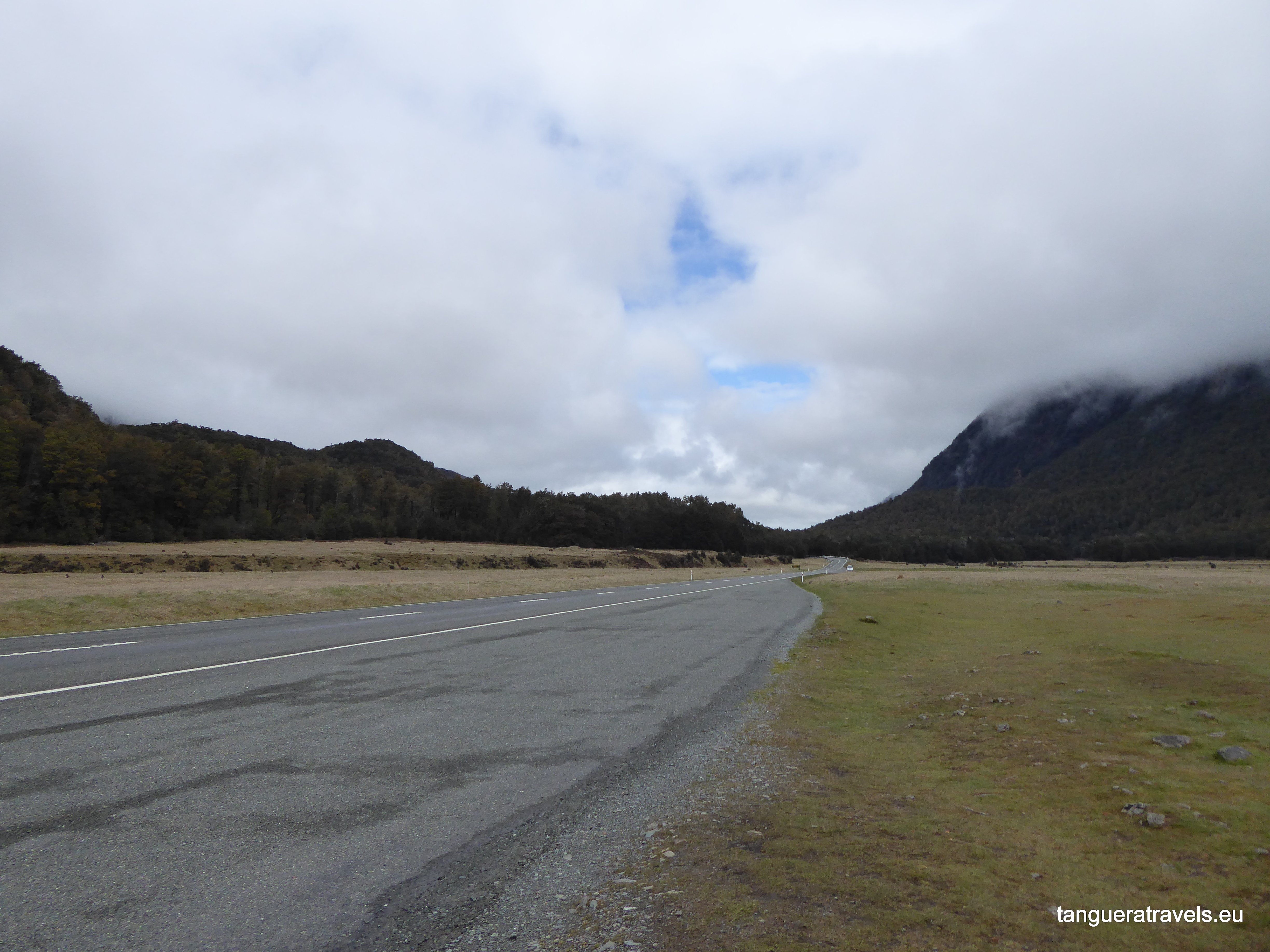 The next morning we had some news: our tour was going ahead. The bus to Milford stopped several times during the two hour journey for us to take photos. 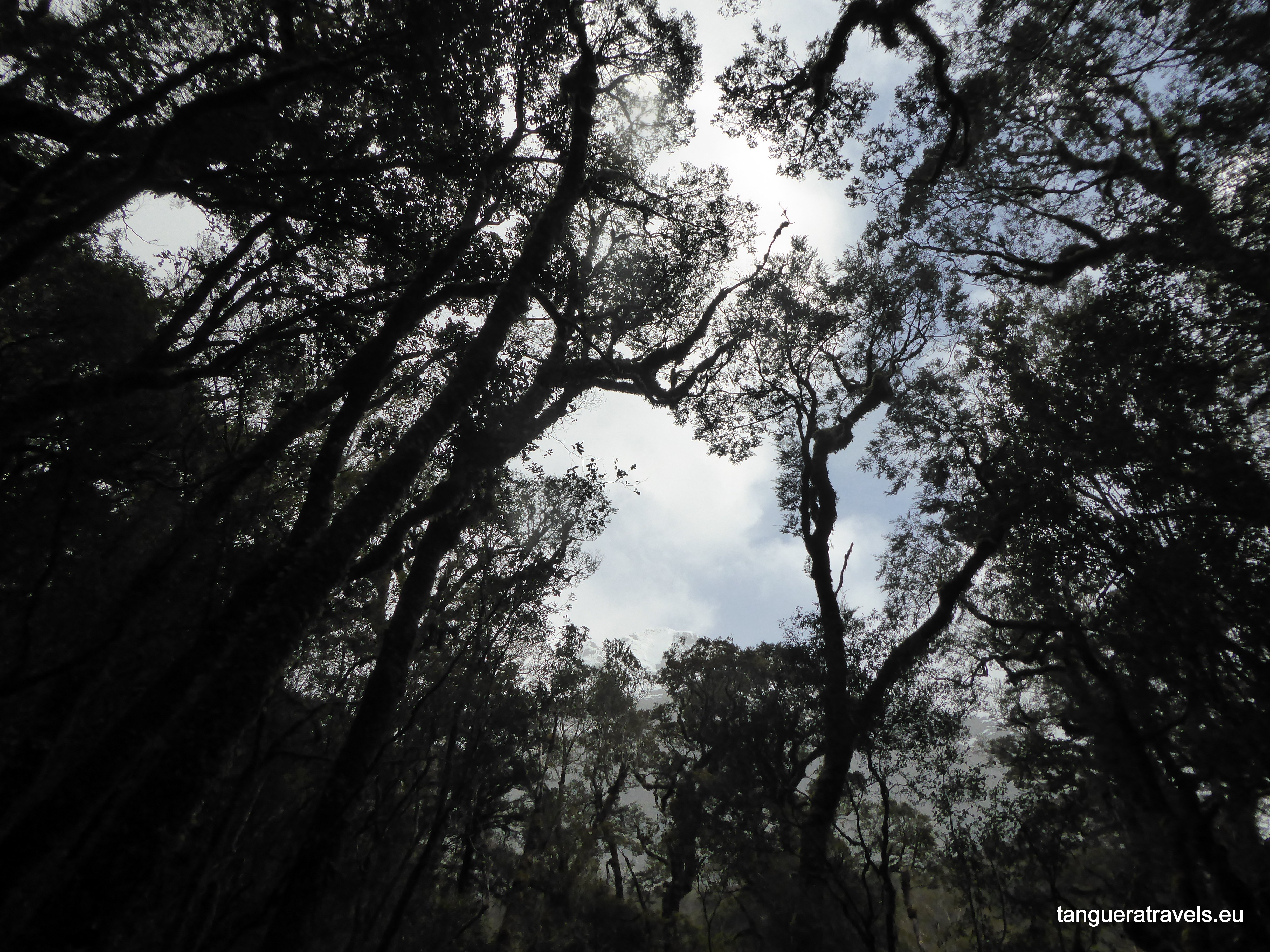 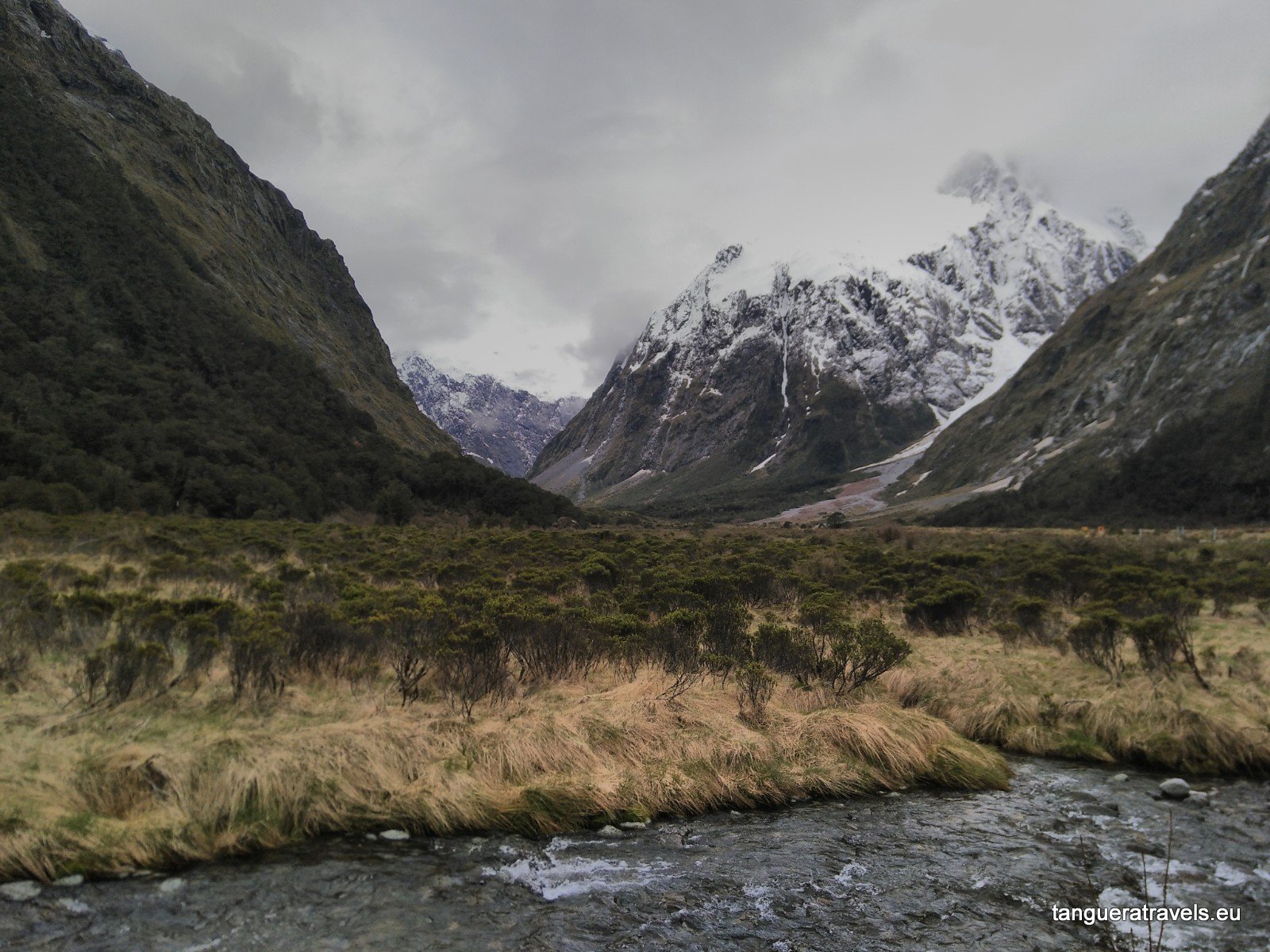 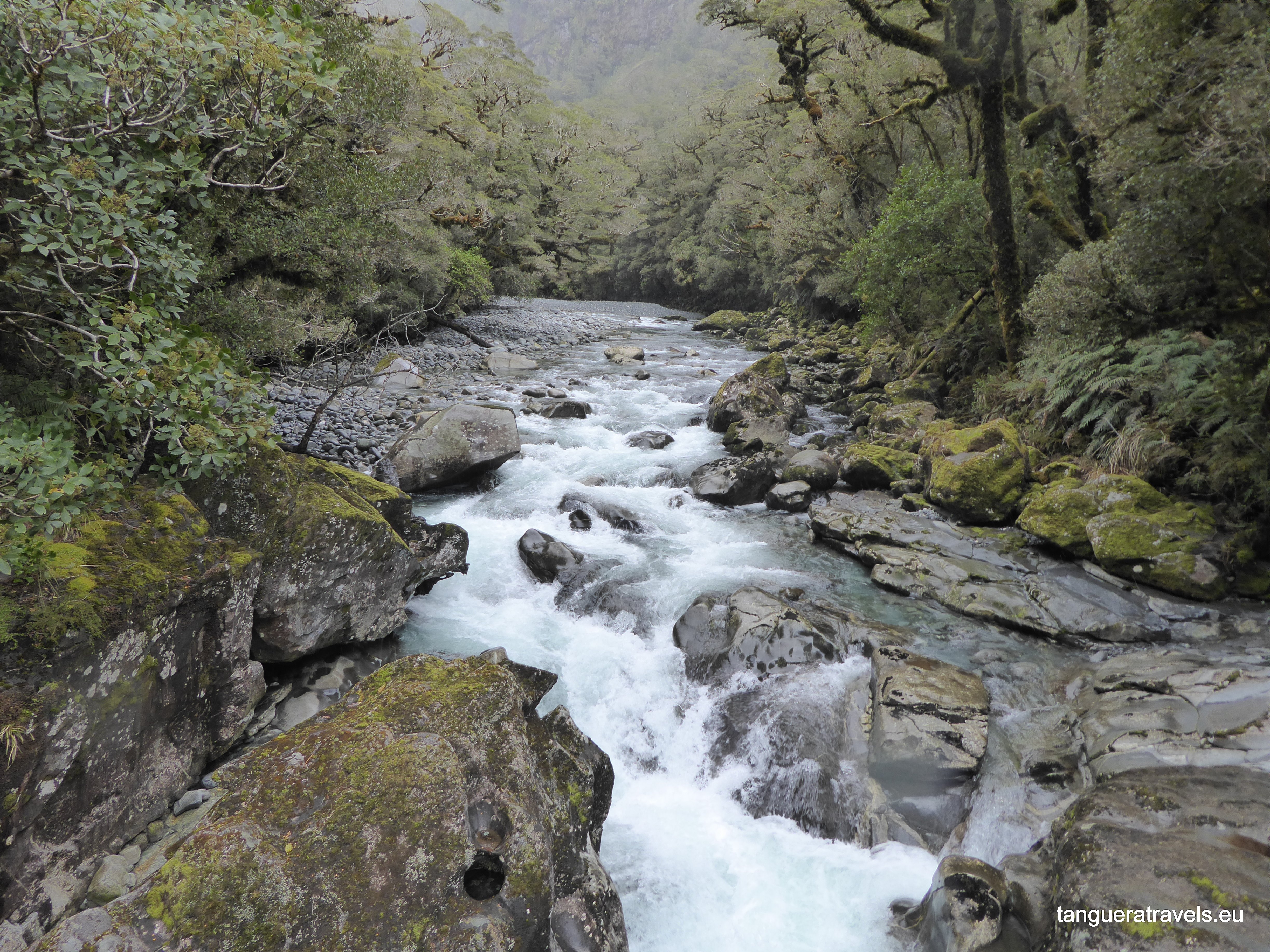 We arrived to board the Milford Mariner in the late afternoon. Out on the sound, it was chilly, overcast and foggy, but there was no snow or rain. 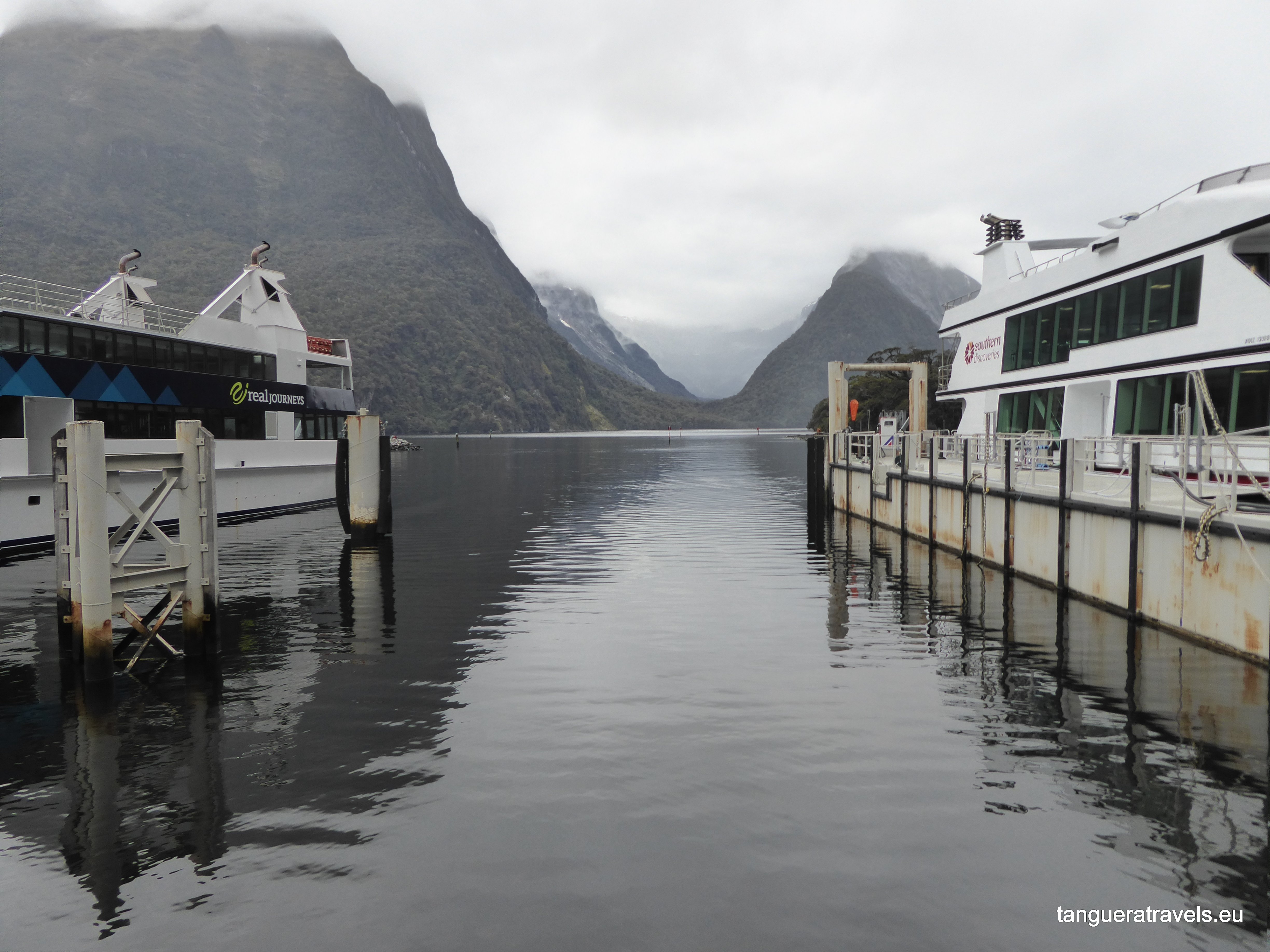 We headed into a little cove to dock for the night. The tour included optional activities; either kayaking or going on a trip on a speedboat to try to spot wildlife. 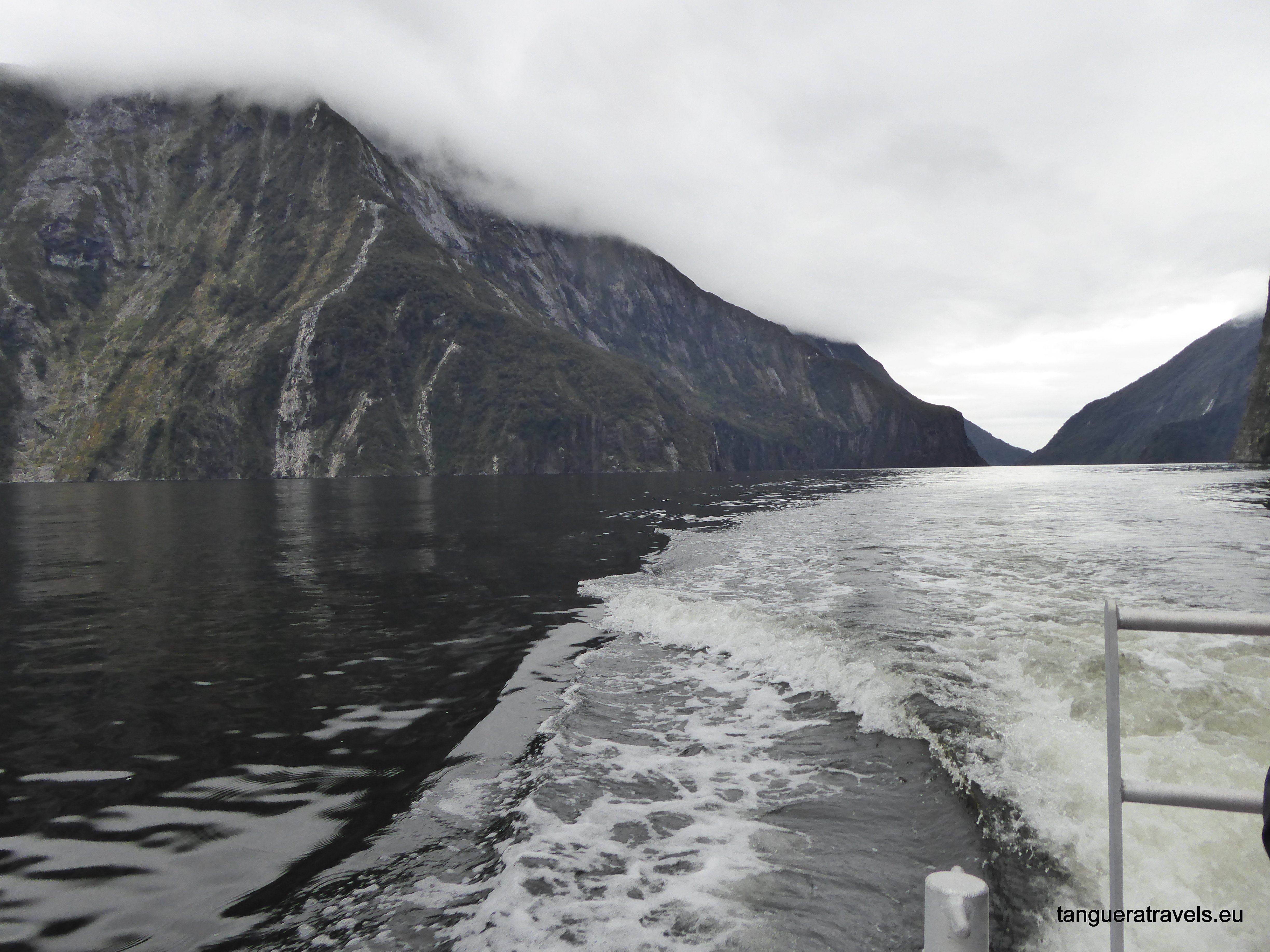 We chose the second option, although we didn’t manage to see any birds or seals. It was just us and the Milford Mariner in that cove. 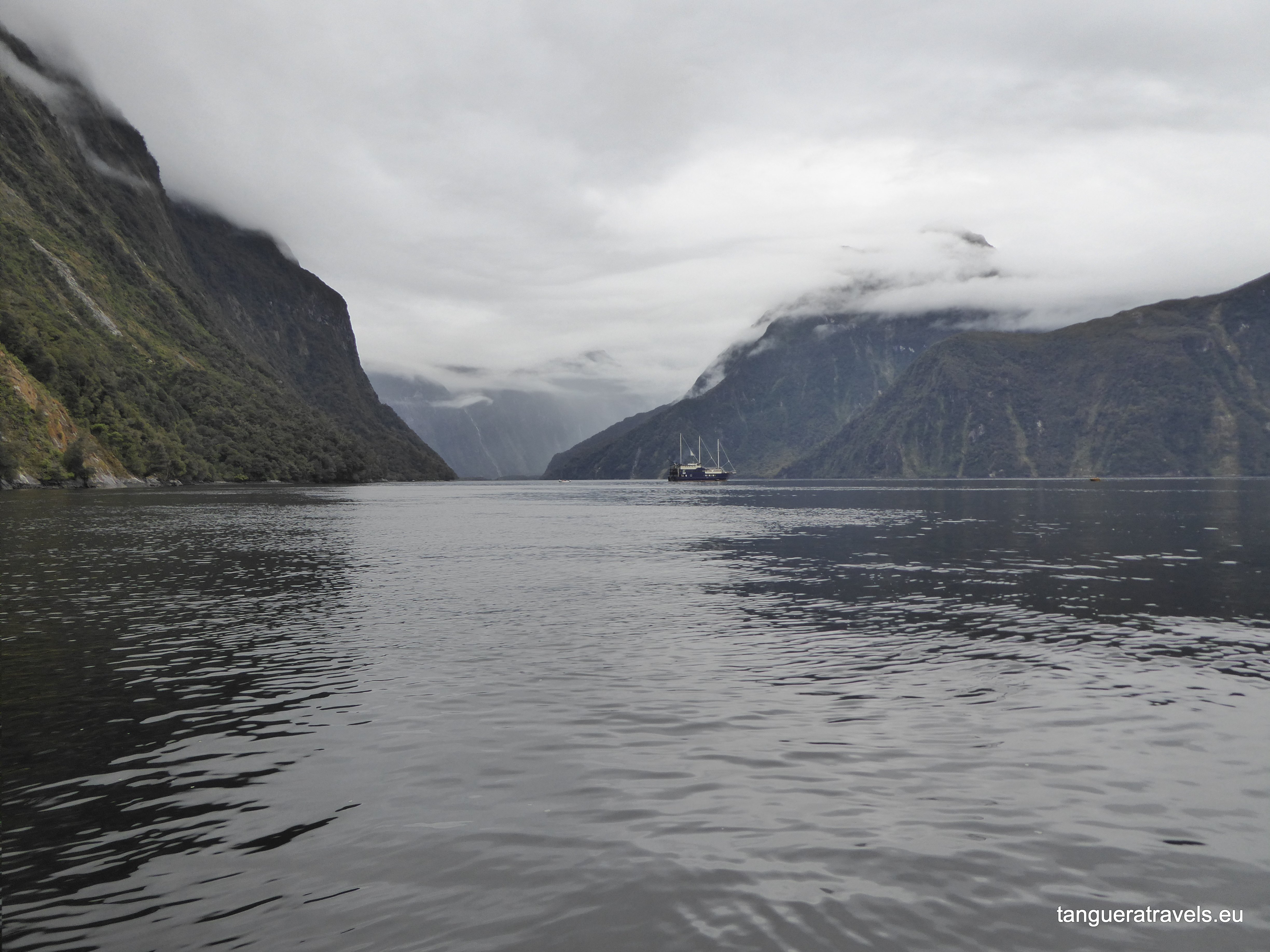 Our guide told us about the occasional “tree avalanches” which can occur after heavy rain fall. I could imagine it happening as I looked at the trees clinging precariously to the sheer cliffs on both sides of the cove. 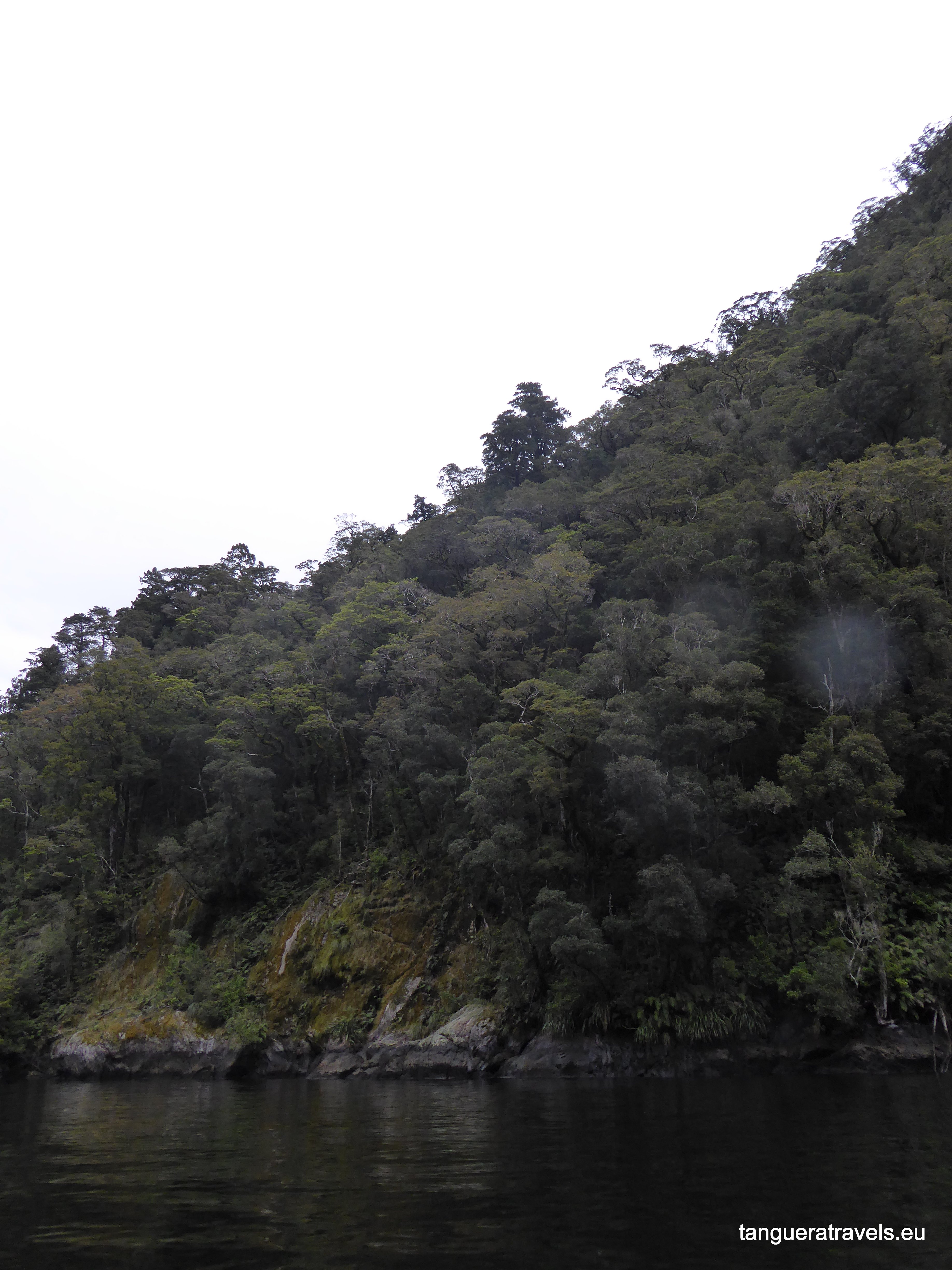 Back on board, it was time for dinner, followed by a delicious selection of desserts. I have to say, I didn’t expect to get food that good on a boat. The chef even came out to give an introductory speech about the desserts buffet. I’ll just say homemade eclairs and leave the rest to your imagination…

After an early breakfast the next day, the captain brought the boat out on to the Tasman sea which was the only time the water got choppy. 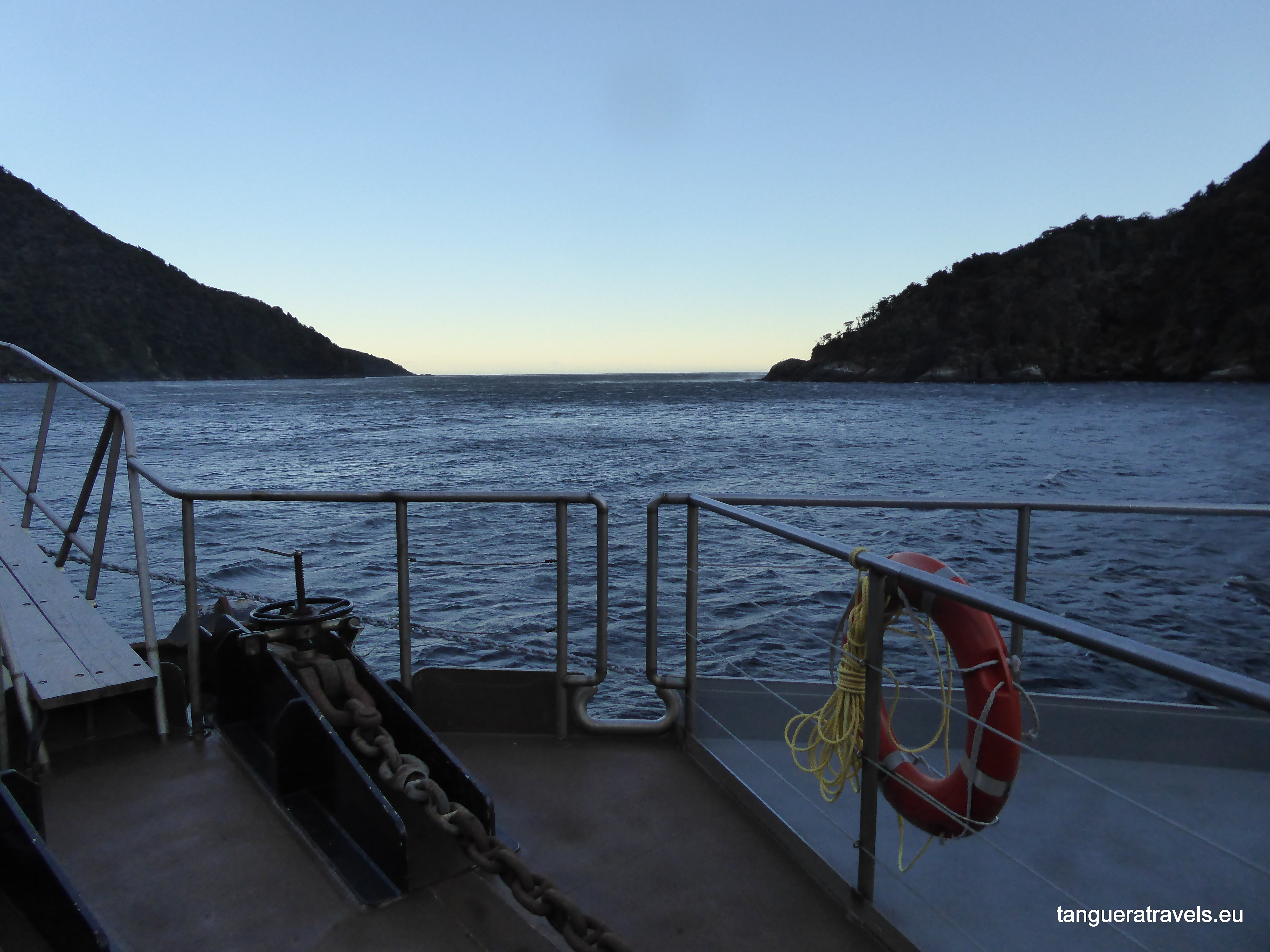 And quite choppy it was too. I headed quickly inside to sit down and concentrate on not getting sick. I was wearing acupressure wrists on this trip after suffering from sea sickness in Argentina and in France and they really did work for me. 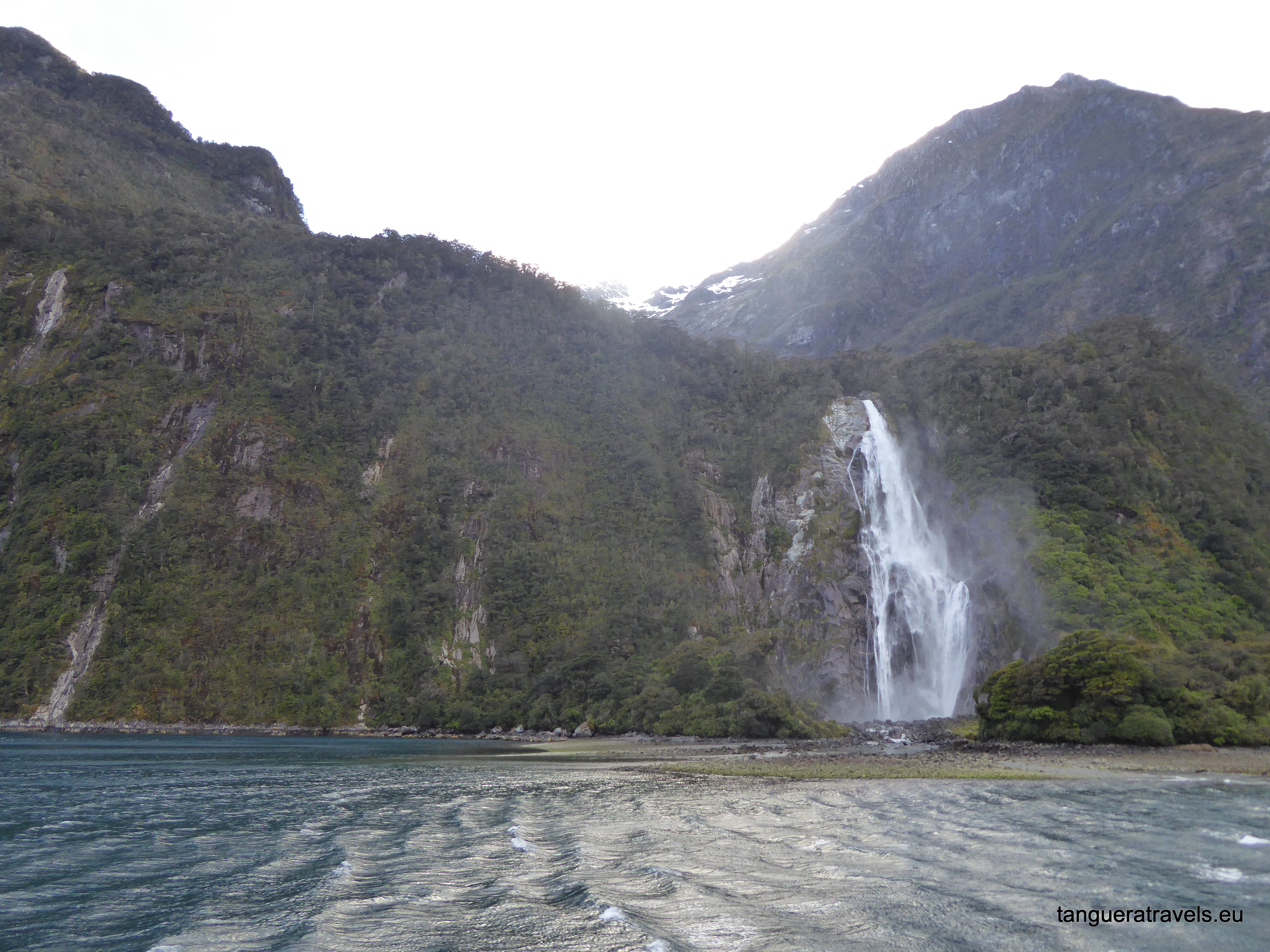 After our brief excursion on to the open sea, it was time to head back to Milford, where the tour bus was waiting to take us back to Queenstown. 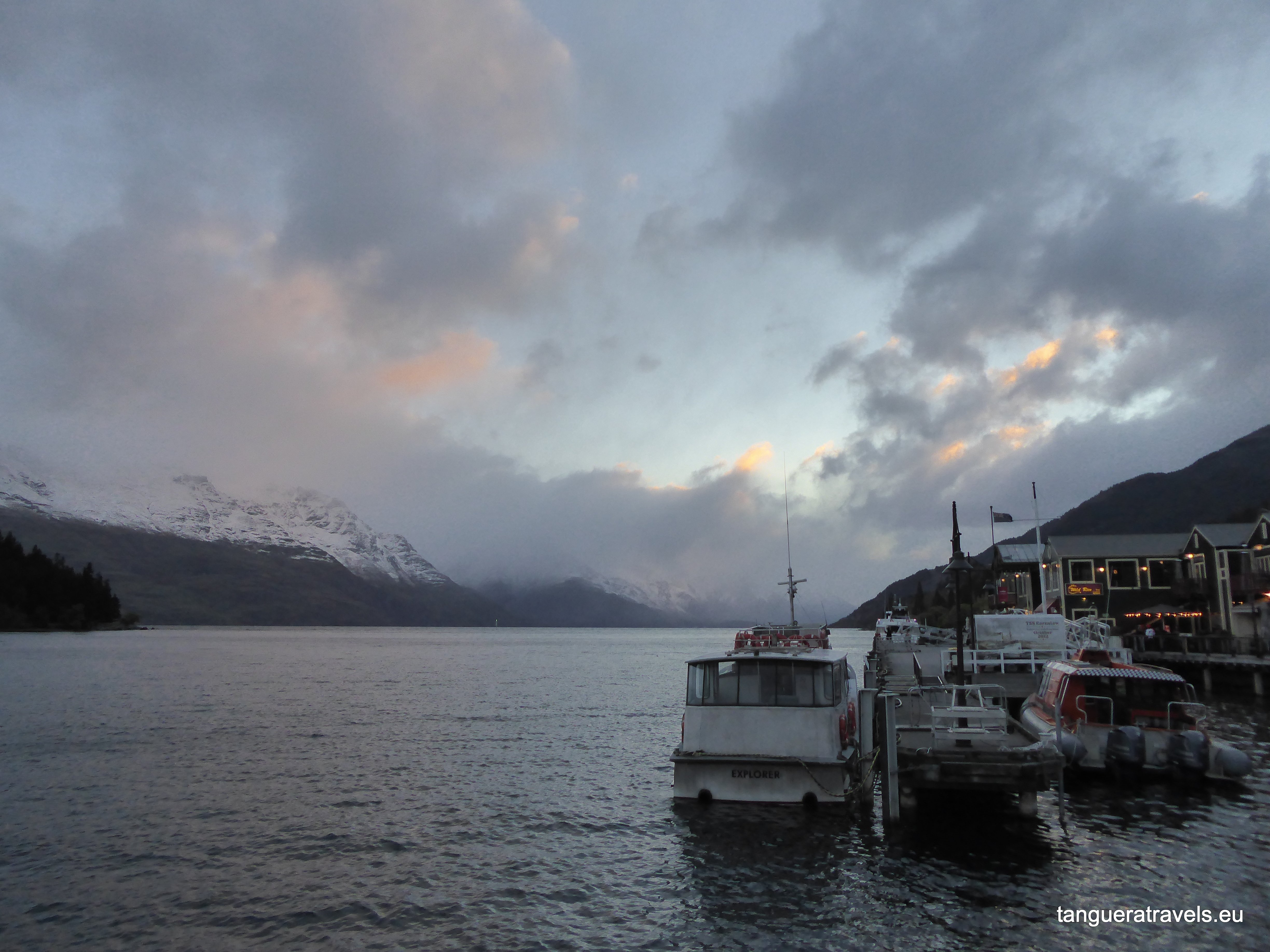 There are different ways to experience the sounds, depending on your interests, budget and time available. There are few boats with a license to be out on the sounds in the evenings and at night and I really enjoyed the peacefulness of the overnight cruise. A day cruise, with just two or three hours on the sound would have been rushed and a very different experience.
Being on an overnight cruise also means you’ll be able to see sunset and sunrise in these very beautiful surroundings. Milford Sound is a really popular destination, so if you have your heart set on seeing it, it’s advisible to reserve a tour in advance.

Have you been to Milford Sound? What’s your view on overnight vs day tour? Let me know in the comments below! 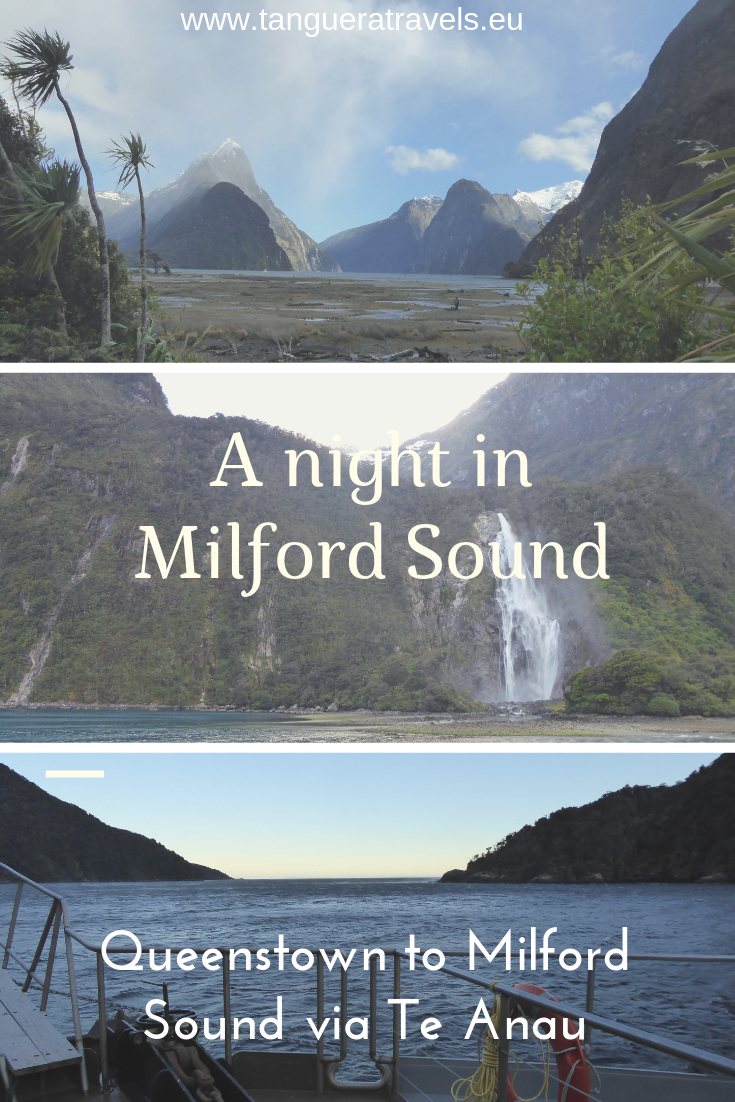 4 thoughts on “A night in Milford Sound”