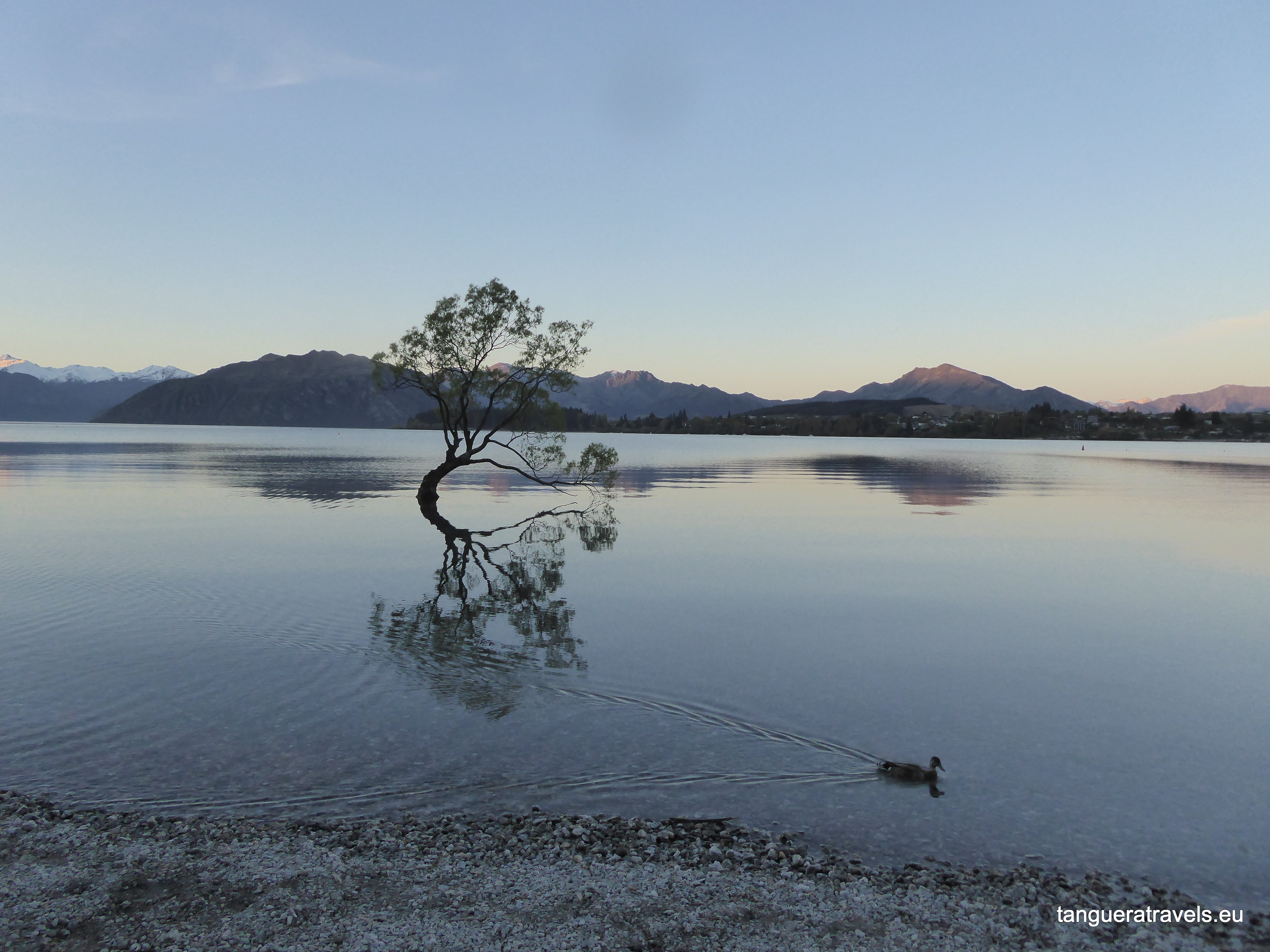 The bus stopped just in front of the lake. I was still too sleepy to appreciate the view. It hadn’t been a long ride – just under two hours – but it had been an early start. Tea was definitely required before I could start trying to locate my accommodation. The other side of the road was lined with cafés and restaurants. I drank tea and ate breakfast in Relishes while I wrote my first batch of postcards. I didn’t have a plan of what I wanted to do here. Just relax, walk around, write a bit, take some photos, drink tea, look for quiet places. Every holiday needs a few days like these … 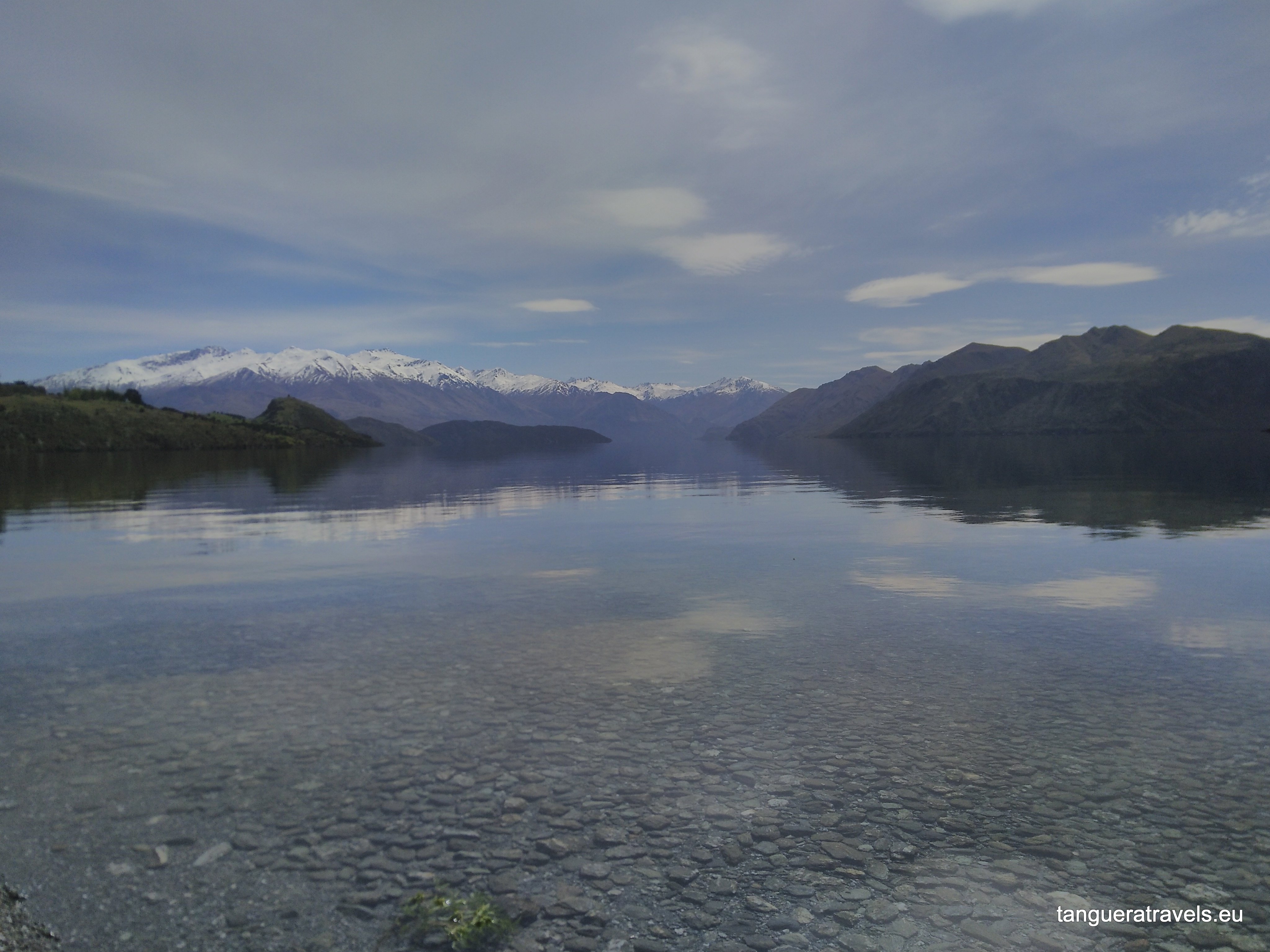 This walk took me just over an hour one way, walking at a leisurely pace with lots of stops for photos.
If you are facing Lake Wanaka, you need to go left and walk along the lake.

When I was there, last October, 2000 clay tiles known as the Millenium Walkway led out of the town towards Waterfall Creek.

The tiles were the result of a community art project and list historical (and slightly quirky) events in the last 2000 years.

As I took these photos, I didn’t realise that just a few months later, they would be removed as part of plans to redevelop the lakeside. It doesn’t seem to be clear what will happen with the handpainted tiles, some of which were paid for by local businesses. Hopefully a solution will be found to keep them somewhere prominent.

Just after the car park at the edge of the town is probably the most photographed tree on the south island, if not New Zealand, which even has its own hastag, #thatwanakatree. I was staying not far from here, so I came back to take some photos at sunset too. Otherwise, during the day you’ll often have this spot for yourself. 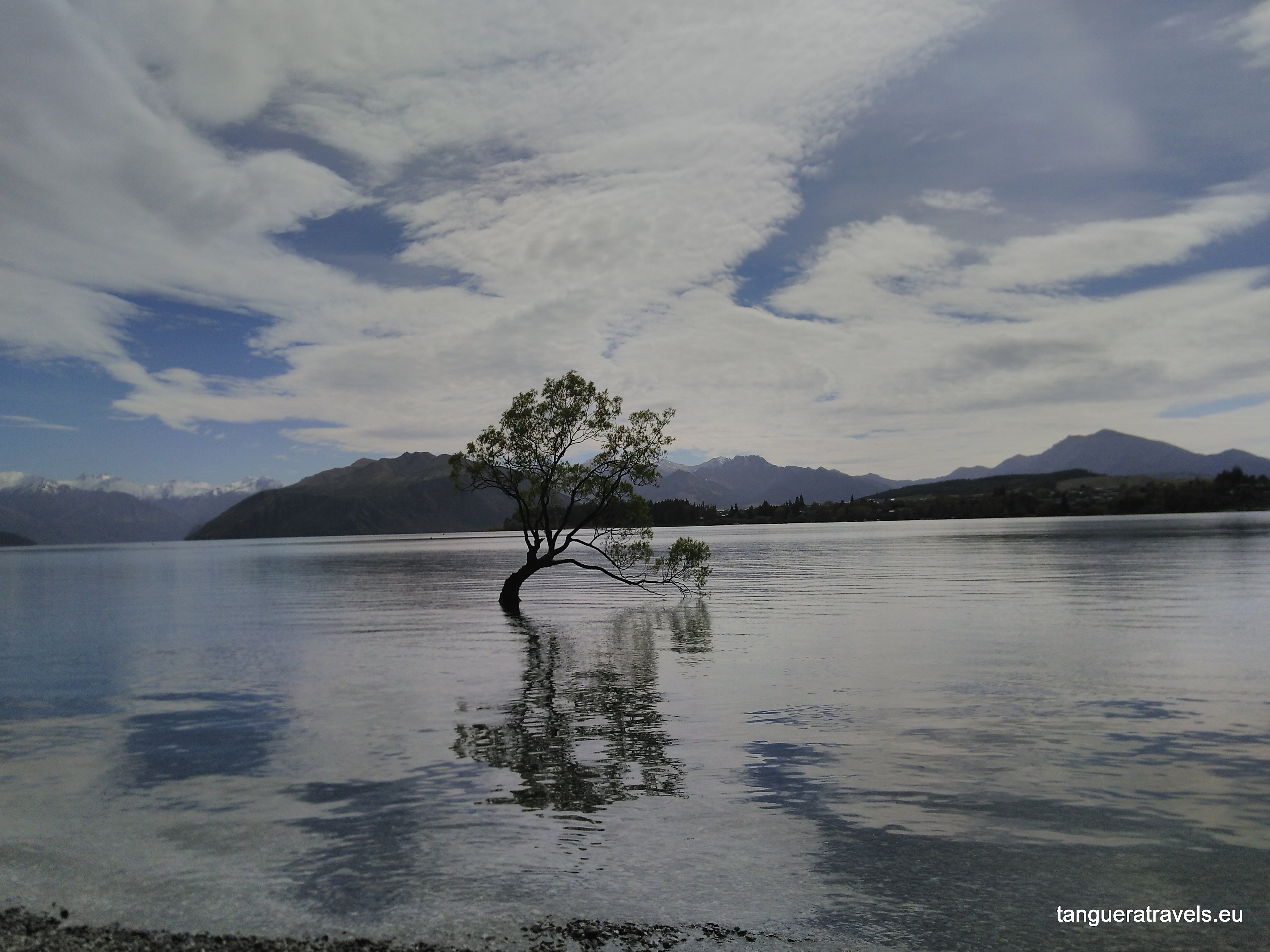 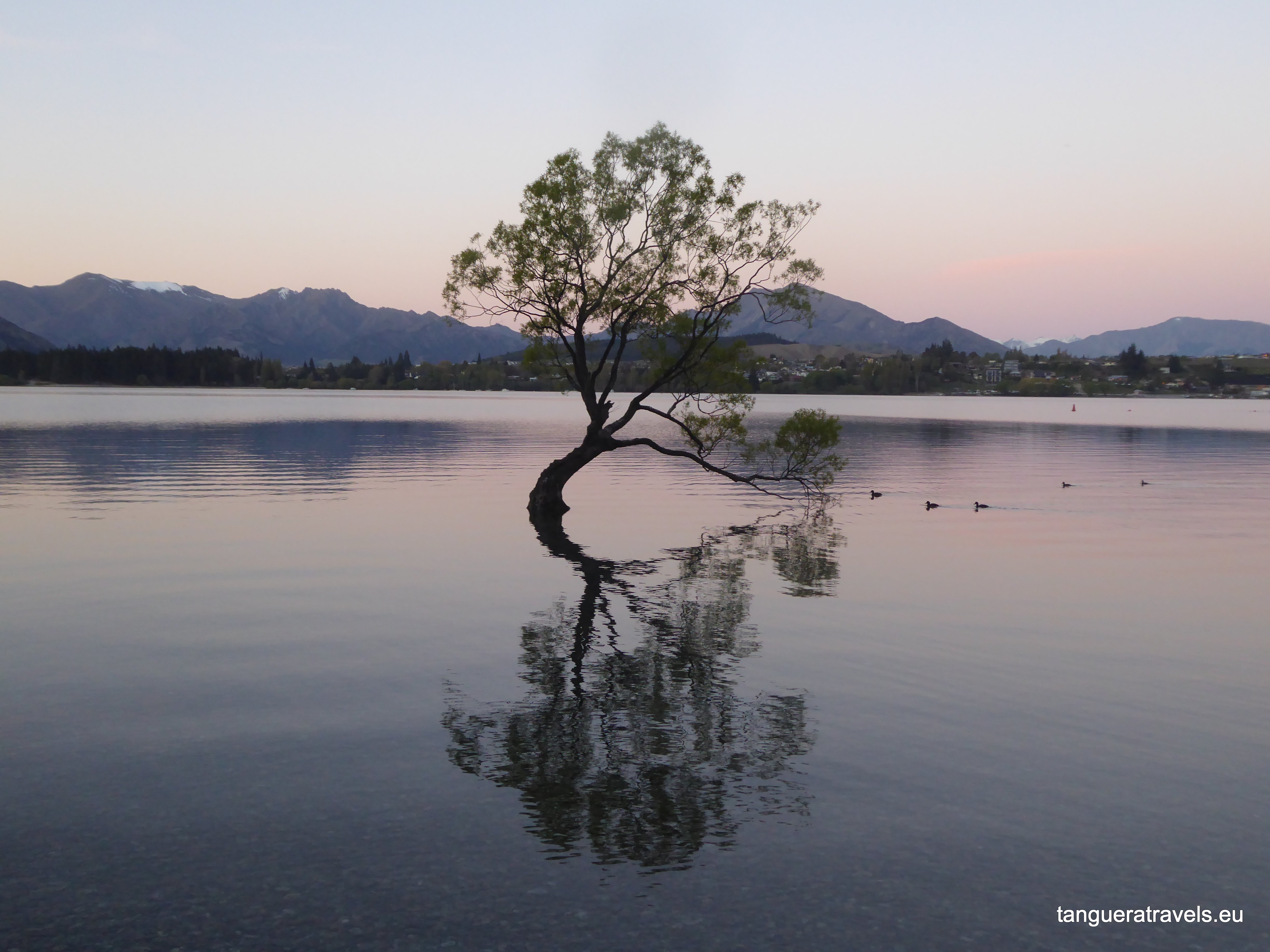 I continued along the high track until I got to Waterfall Creek which is a nice spot for a break. If you want a longer walk, you can continue on to Glendhu Bay which is about 11 km further. 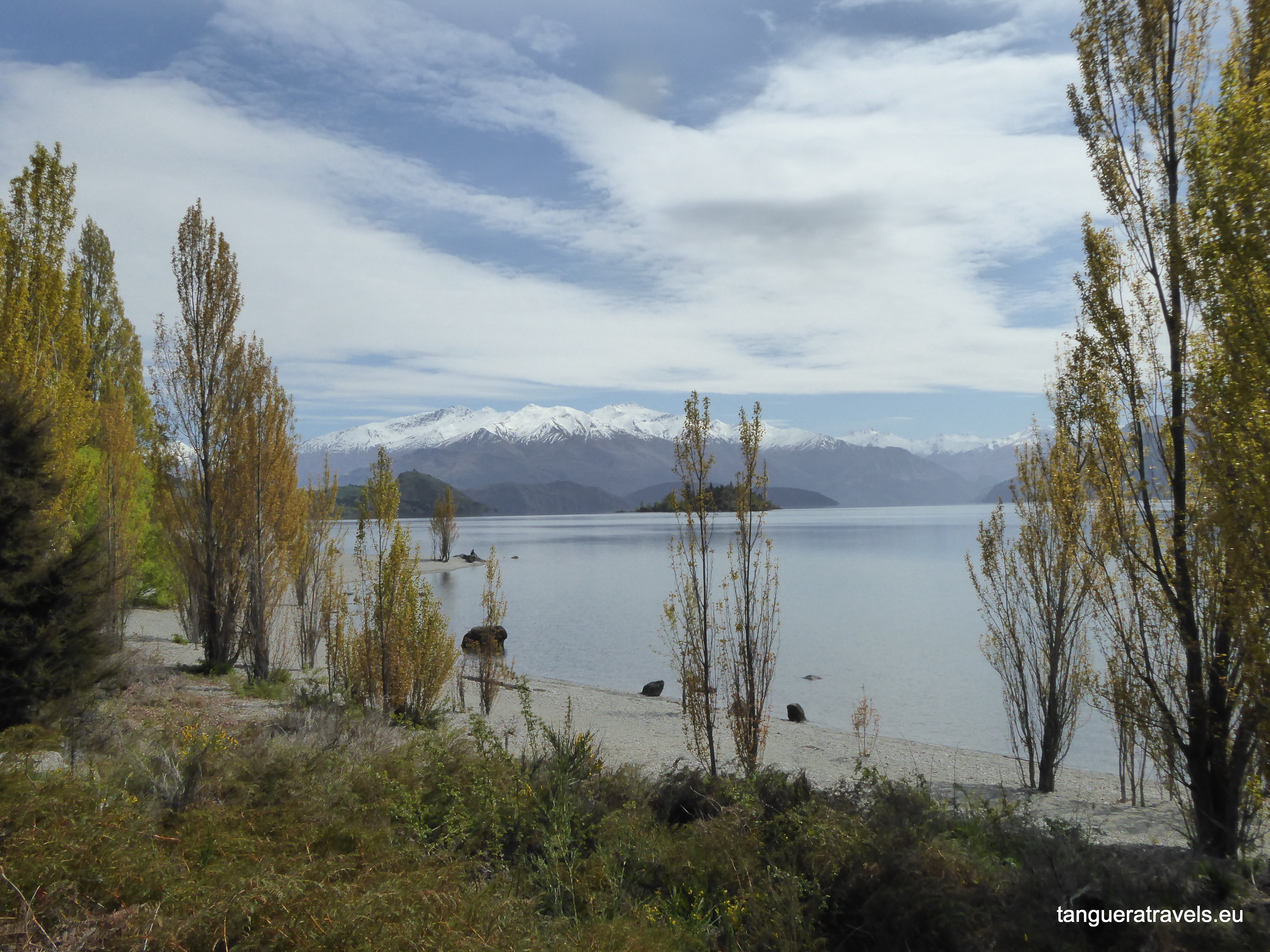 The next day I walked the other way around the lake, towards Eely Point. This took me about 30-40 minutes. To get there, I first walked through the dinosaur park, which is a playground with a slide in the form of a dinosaur. Nearby is a large sculpture of a hand called the hand that nurtures. It is by Christchurch-born sculptor Llew Summers, who sadly died at the beginning of August 2019. You can see his work in public spaces all around New Zealand. Read more about Llew Summers and his work here.

Like the Waterfall Creek track it was mostly flat to Eely Point and further along to Bremner Bay. Eely Point is a sheltered spot and an ideal spot for a picnic. There were a few more people along this side of the lake than what I had seen the previous day, but at no point did it feel crowded. 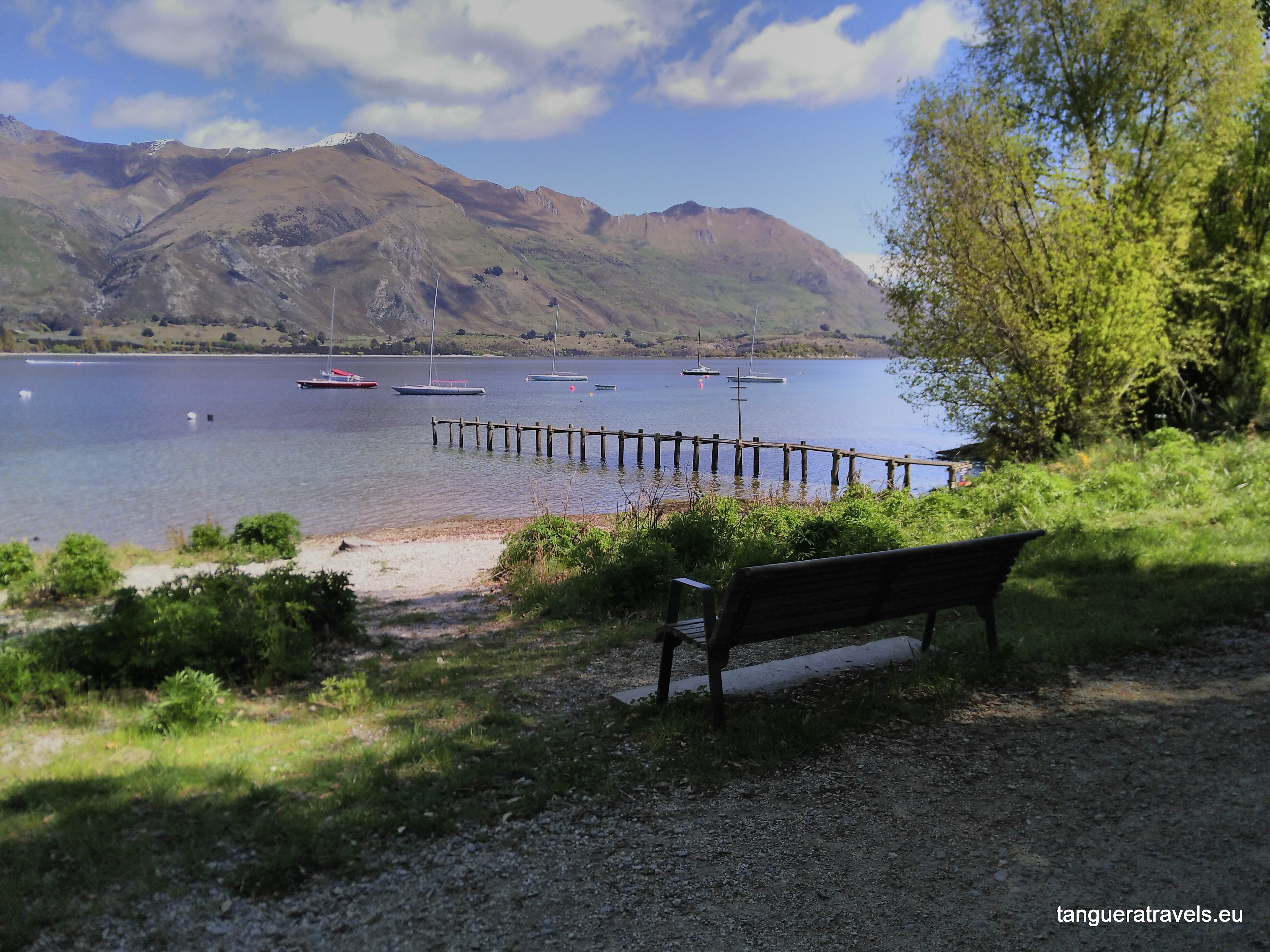 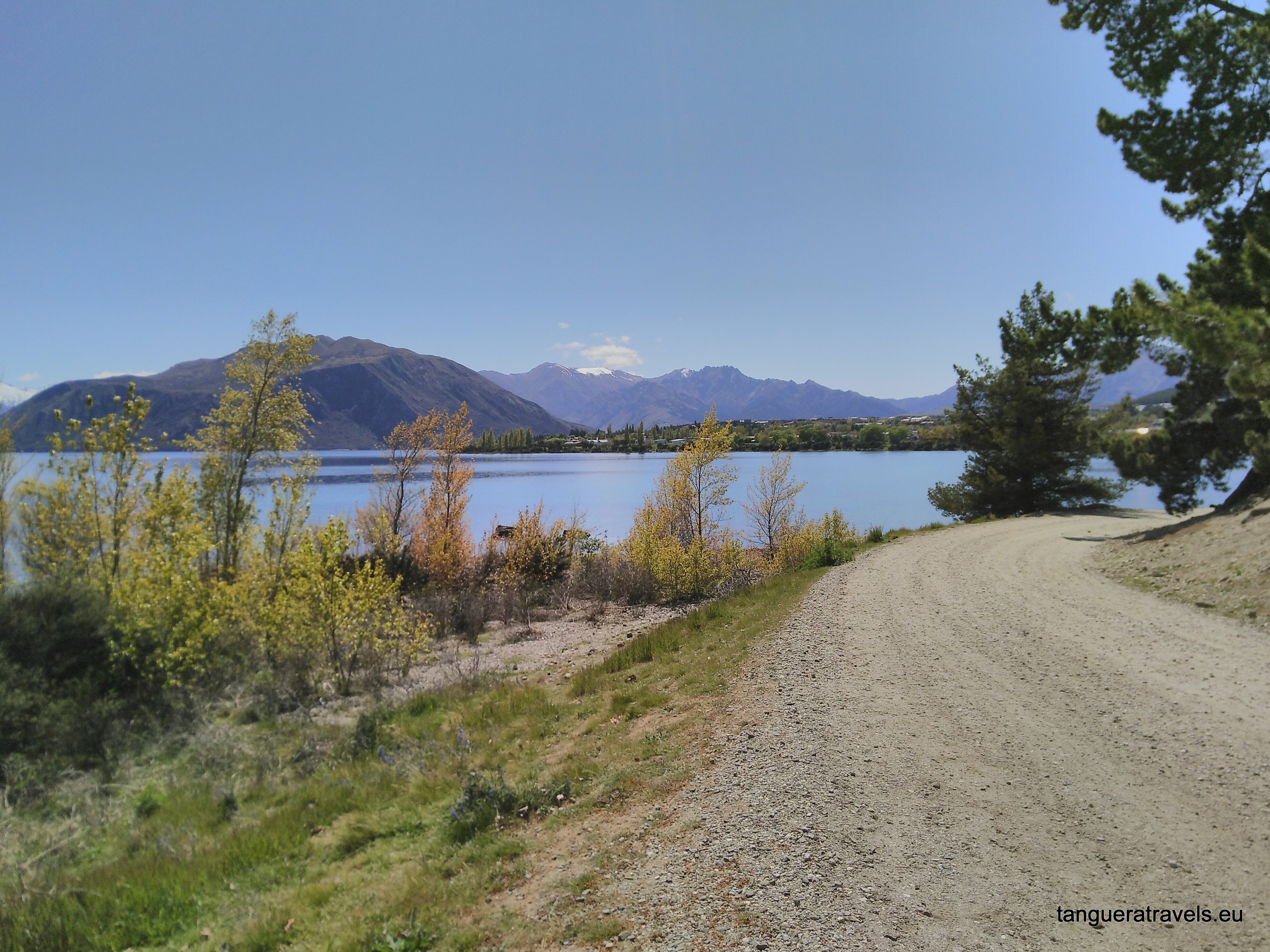 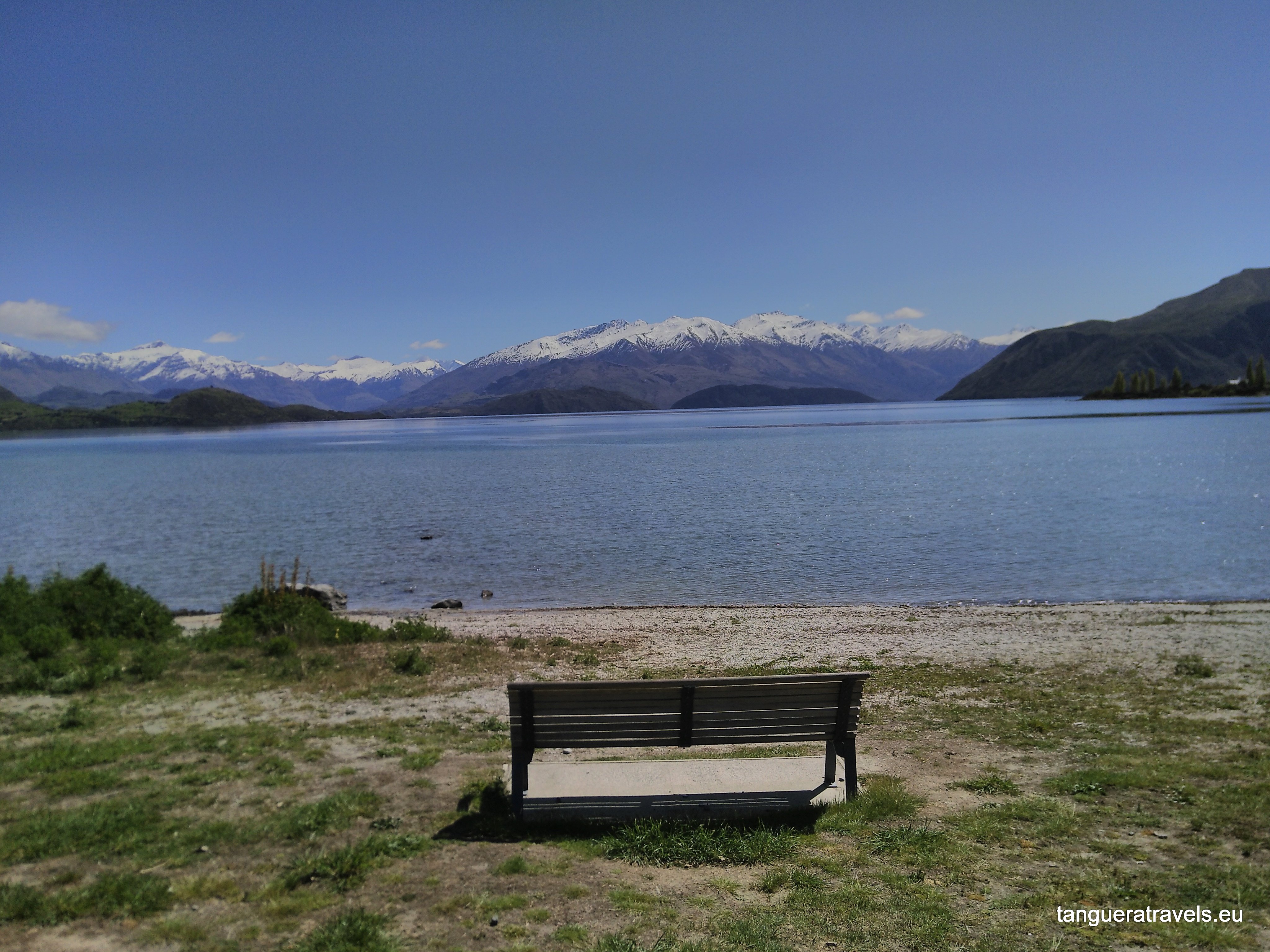 The centre of Wanaka town is compact and concentrated around Ardmore street. This is where you’ll find most of the cafés, restaurants and shops. Wanaka also has two cinemas, including one where you can watch the film from a Morris Minor. Cinema Paradiso is about 5 minutes walking distance from Ardmore Street. Ruby’s Cinema is a bit further, probably about 30 minutes on foot. Always good to have some options in case of rain!

After getting something to eat at Ritual Espresso Cafe, I went to see the Wanaka War Memorial. Located on a small hill about ten minutes walk from Ardmore Street, it commemorates those that died during the Boer War, as well as both World Wars. The monument itself consists of a white obelisk. Great views of the town and lake from here. I was there during the day, but I’m sure this would be a great place to watch the sunset 🙂 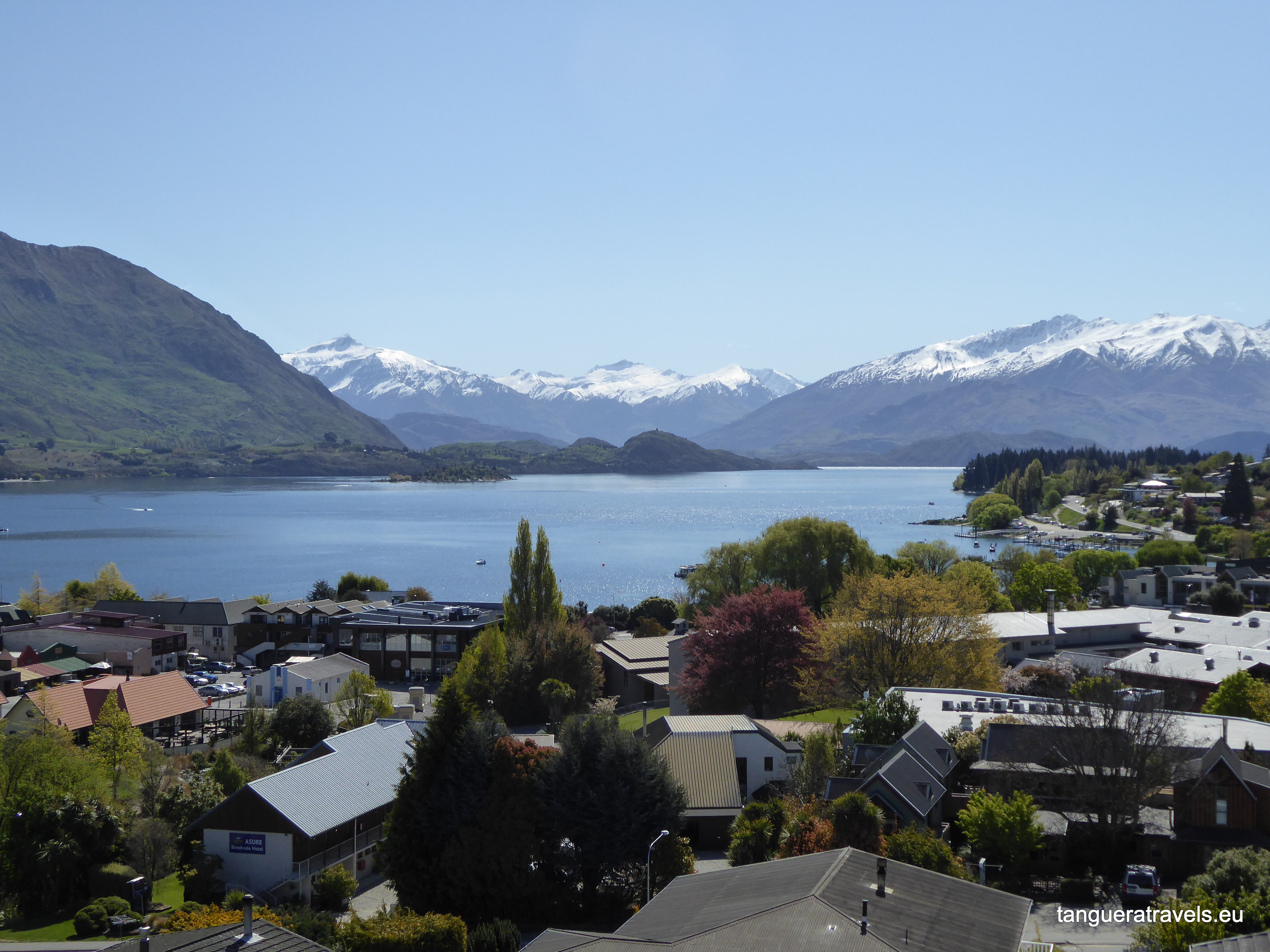 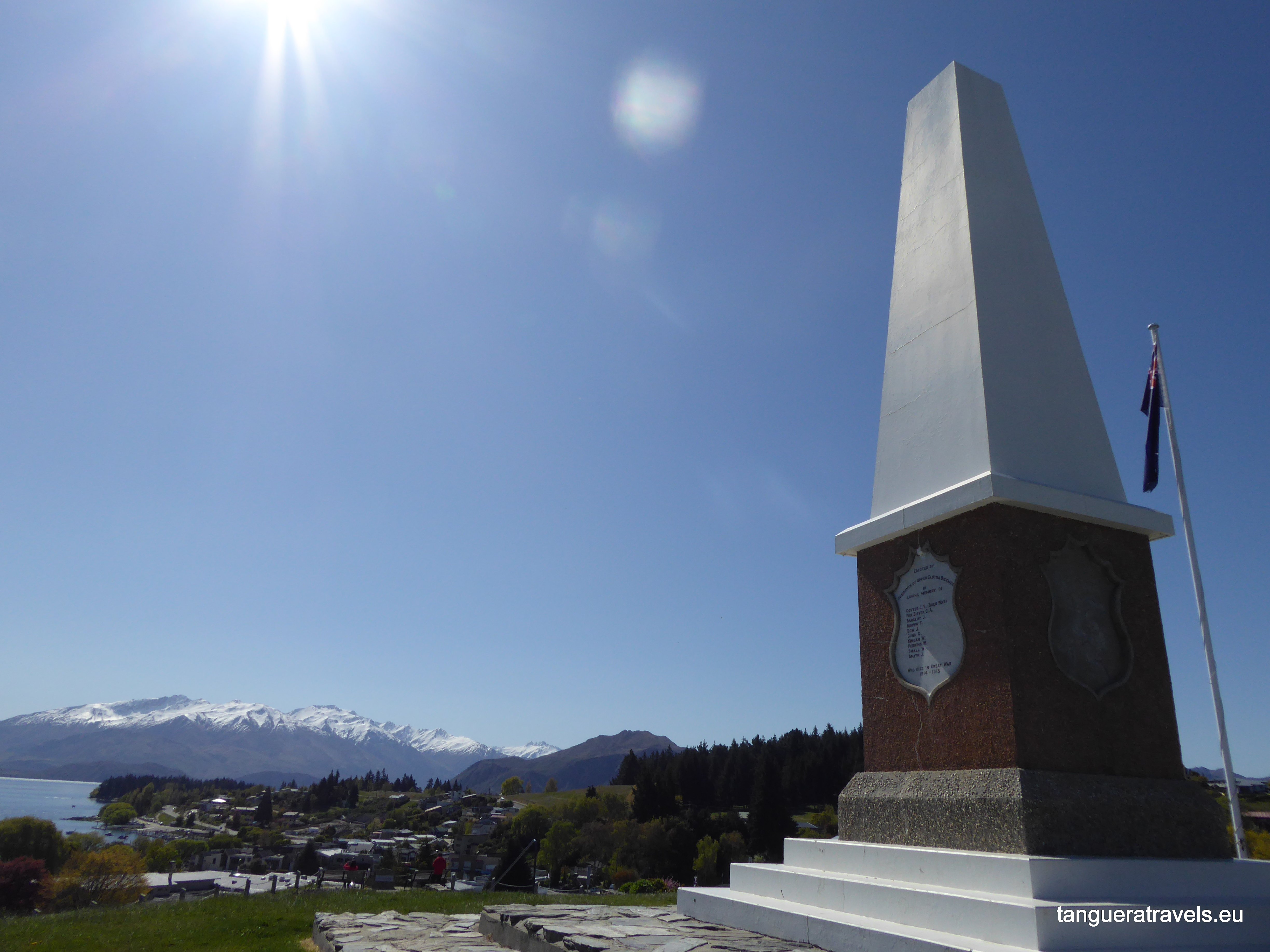 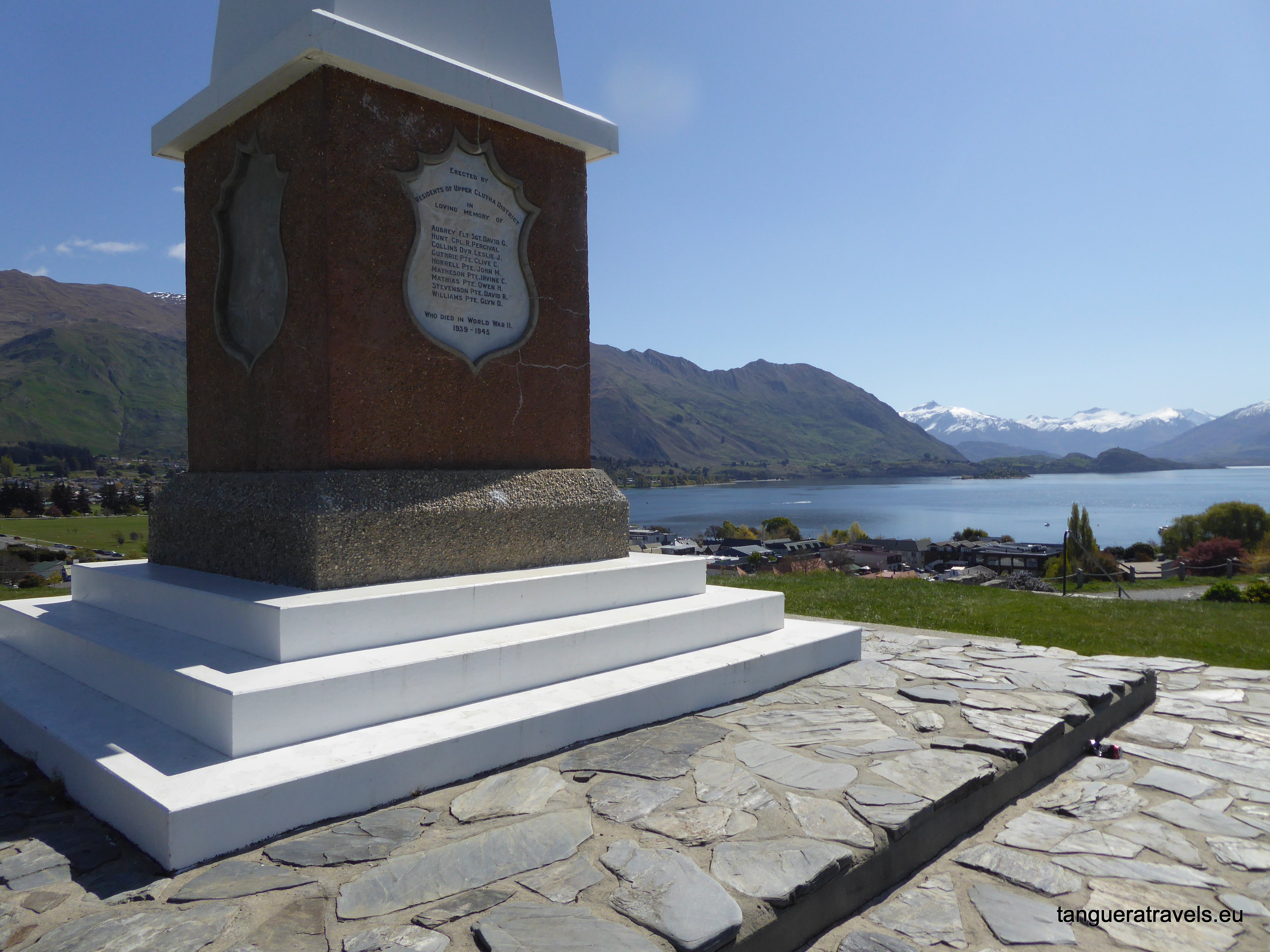 Maps and more information about Wanaka

Of course there are many more things to do in and especially around Wanaka. I would have loved to visit the Mount Aspiring National Park but that would have been too difficult without a car.

This general reference guide managed by Lake Wanaka Tourism, a Regional Tourism Organisation:  is a good starting point when you’re figuring out your itinierary. Lake Wanaka Tourism also owns the Wanaka I-SITE visitor centre which is located on Ardmore street, close to where the regional buses arrive and depart.

The visitor centre also provides a map of Wanaka town which you can download for free here: and a map of the region. 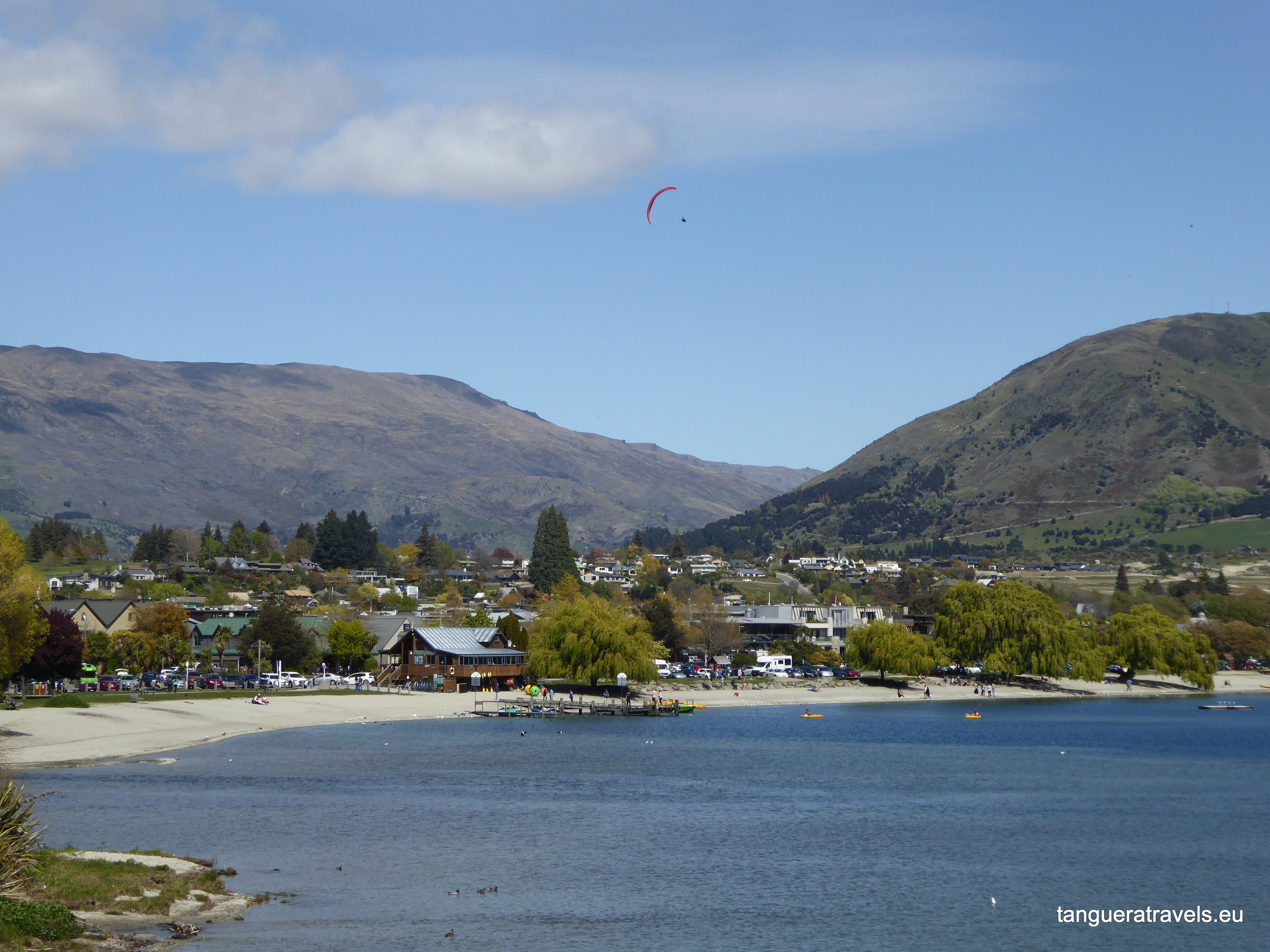 Many people skip Wanaka in favour of Queenstown and I’m so glad I was able to get to both. But I have to admit Wanaka won a special place in my heart. What do you think? Let me know in the comments below! 2 thoughts on “Short walks in and around Wanaka”