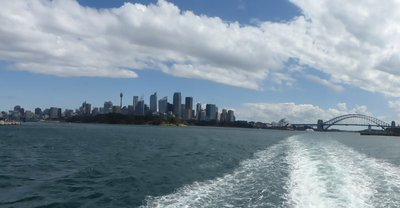 That blue sky is deceptive…

One of the first things I did when I arrived in Sydney was to go shopping.

The changeable early Spring weather reminds me a bit of home and not in a good way. After a week in the Northern Territory I have to say that day time temperatures of 12 °C come as a bit of a shock.

So it took a lot of willpower to head out to my first Sydney milonga on a cold, wet Wednesday night. Blogging the old fashioned way. Scribbling in a notebook, pretending to be a writer. But mostly I just eat cake.

I arrived nearly an hour after the milonga was due to start, mainly because I got lost on the walk from Central Station.

But when I entered the upstairs room at Bar Cleveland everyone was standing around the dance floor, their attention focused on one of the teachers, who was enthusiastically explaining and demonstrating the playful elements of Di Sarli’s music.

As I found out later from the organisers, there had been a last minute change to the usual event, as there were two teachers visiting from Buenos Aires. They were just finishing a workshop on musicality and this was to be followed by a guided practica and then a milonga. I wished I’d checked their website before heading out. The workshop looked like it would have been fun.

Still, I will have another chance, as the teachers were Daniel Nacucchio and Cristina Sosa and I will be taking one of their classes at the Singapore Tango Festival.

The event was hosted by Tango Synergy and I had a good chat with two of the organisers, Jean and Karen. Other than that, I mostly observed the guided practica from the side of the dance floor.

Daniel and Cristina are beautiful dancers and I enjoyed having a preview of the Singapore class, watching them guide and give tips. Instead of a cortina, the tandas were marked by Daniel ringing a bell to give some explanations on different kinds of walking, posture or a particular figure.

There were definitely more women than men, as is often the case, but my impression was that people preferred to dance with those they knew. It reminded me of the milongas back home, where I was only asked to dance after I had there a few times, and sometimes then only when I had first been out on the dance floor with a friend. There were also a lot more people at this event than the ones I previously attended in Darwin and Bangkok. No doubt this was also due to the visiting maestros,

Just when I thought I would be leaving the first tango event of my trip without dancing a single tanda, I was asked to dance by another female dancer who was learning to lead. This is something I’d like to do in the future, I just feel that I still have a lot of work to do in the following role, although this article argues that even learning some of the basic leader technique can also help with the following. The lady I was dancing with confirmed that since she has started to lead, her following has really improved. Maybe I will try a few beginner lessons as a leader when I am back home…

I stayed for the first hour of the milonga which followed the practica and I did get to dance another tanda before I left. This is a beautiful venue with a large dance floor, high ceilings and is located within the building of one of Sydney’s oldest social clubs which also houses restaurants, an amusement arcade and fitness centres. The room where the milonga takes place is on the second level, on the right as you come up the stairs. There are small tables around the dance floor which reminded me of some of the milongas in Buenos Aires. I arrived about 20 minutes after the milonga was due to start. A few people were already there but no one was dancing yet. I thought with less people, I might stand a better chance of getting a dance, but here I also felt that people preferred to dance with those that they knew. It started to get busier as of about 10pm and it was then that I was invited to dance a couple of times.

Two milongas gave me a brief glimpse at the Sydney tango scene, but I’ll definitely plan in more dancing time for the next visit. Taking classes would also have been a good way to get to know people and I would have done that if I’d had more time. Teachers seem to be flexible here about students just joining for a couple of classes and this is what I’m planning to do during my next stop in Hobart.

Practical information: As mentioned above, the Wednesday event is normally organised as a milonga which goes from 20:00- 23:30. I paid 13 AUD for the guided practica and milonga, but entry to the regular milonga is 8 AUD. If you are a member of Tango Synergy (40AUD/year), entry costs 5 AUD.
Bar Cleveland is on the corner of Cleveland and Bourke Street. It’s about 20 minutes walking from Central Station. If you don’t get lost…
Milonga Fuego takes place the second Saturday and fourth Friday of the month. You can check the date of the next milonga here. I paid 20 AUD entry for the Friday night milonga. The City Tattersalls Club is at 204 Pitt Street, a short walk from Town Hall.
A calendar of tango events in Sydney is available here. Make sure to click on the link to the event you want to attend, which will usually provide the link to the organiser’s website. Always check the website in case of last minute changes.

Do you have tips for newcomers to the Sydney tango scene? I’d love to hear from you in the comments below!

After all that complaining about the weather, Sydney showed her sunny side today, so we spent the day at this beautiful, secluded beach in the Sydney Harbour National Park. Can you guess which one it is?