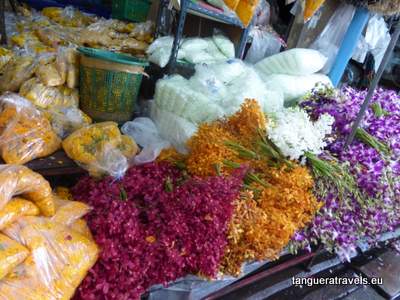 It was my first time in Bangkok and I had 48 hours. My only preparation was booking my accommodation and finding out where I could dance tango while I was there. But I did find 6 non-tango things to do … 1. Avoid the tuk tuk temple tour scam (or not)

Well, I’m not the only one who has fallen for this particular scam and I suppose anyone who has been to Bangkok has at least heard of it.

You are heading to visit a well known tourist attraction (Grand Palace, in my case), perhaps you are not quite sure if you are going in the right direction and then a friendly guy asks if he can help…

Are you looking for the Grand Palace?
Yes, you answer.
Alas, he responds, it’s closed this morning, only Thai people can enter as there is a religious ceremony going on.

But luckily for you, he has another idea. What about a trip in a tuk tuk to see the temple of the standing Buddha? And then a bit of souvenir shopping?

At this stage I was thinking this was probably not the best idea. It did sound a bit scammish. One of the biggest attractions in Bangkok closed on a Friday morning – really? On the other hand, I did want a ride in a tuk tuk. And the guy had promised to bring me back to the spot from which we were departing within two hours and that I would only have to pay him when we returned.

And so off we went …

We went to the temple of the standing Buddha first and he waited for me outside while I walked around. There weren’t many people and I found it quiet and peaceful. From there the shopping or let’s say the gentle encouragement to shop began, starting with a tailor shop before we moved on to a jewellery shop. I bought a scarf in the first shop , after managing to convince a very persistent (but polite) salesman that I really didn’t need a 7000 Baht suit. I didn’t buy anything in the second shop and then we headed back to the Grand Palace. As you can read in the article via the first link I mention above, some people have had really negative experiences with this scam. I count myself lucky that I had a polite and friendly driver who was true to his word in bringing me back to where we started within two hours and charging me exactly the price we had agreed on (30 Baht). Painting within the Grand Palace complex

2. See the temples during off peak times

So by the time I got to the Grand Palace it was around lunch time and it was PACKED. It was also pouring rain. Which meant I almost wanted to leave as soon as I got in. As I looked around for orientation, I noticed that I was standing next to a meeting point from which free tours were departing. There was one in English departing within a couple of minutes and so I decided to join that. Joining one of these tours does however mean that you can’t retrace your footsteps and see certain parts of the Palace grounds once the tour finishes. If I was doing this again I would go there early in the morning and spend a few hours walking around myself to get a feel for the place, maybe join a tour after that. After leaving the Grand Palace, it was still only around 3pm and so I decided to visit the nearby Wat Po temple complex to see the reclining Buddha statute. Perhaps that was why there was hardly anyone around but after the crowds of the Grand Palace, this was an oasis of tranquility. Most people who were there seemed to be only interested in seeing the reclining Buddha, which is really impressive. But it is also worthwhile to take some time to walk around the beautiful grounds. If you have time, you can get a massage at the traditional Thai massage school which is also located within the temple complex. If you have just arrived and you’re jetlagged but it’s too early to go to sleep, Terminal 21 is a fun place to wander around. As they say themselves, the whole world is here. Each floor is named after a place, such as “Rome”, “Paris”, or simply “Caribbean”. Rome, as seen in Bangkok

Unfortunately I didn’t have time for the night markets during this short trip, but I did get to Pak Klong Talad, the city’s biggest flower market. It is in the old part of the city and not far from the temples I mentioned above, so can be easily combined in a day trip and well worth the visit. For more information and beautiful photos have a look at this blog. The best way to get to Grand Palace, Wat Po and Wat Arun is by boat along the Chao Phyra river. If you don’t have time or energy to visit all the temples you can still see some of them from the water. And a trip on the river is worth it in itself. I don’t normally like to use this phrase, but I suppose if I did, I would call this a “must do” for Bangkok. Find out more about Bangkok by boat here.

Traffic on the Chao Phyra river

Although I love the buzz of being in a big city, there comes a point when I need some quiet time for myself. So I was so happy when by chance I came across Benjakitti Park, a short walk from Asok BTS station. Walking over to the far side of the park, the sound of the traffic becomes a distant hum. I saw barely 10 people in the two hours I spent there on Saturday morning before I had to catch my flight. You can rent bikes and the park has a separate cycling line. You can also rent swan boats for a trip on the lake in the centre of the park. Forty eight hours were definitely not enough to see Bangkok, but they were enough to convince that I need to come back here again one day. But for now, it was time to catch my flight to Darwin… Do you have any tips for what to do (or not) in Bangkok? I’d love to hear from you in the comments below!
Missed my post on dancing tango in Bangkok? You can read it here.

Over the next couple of weeks, I will be sharing some photos and stories of the non tango part of my recent trip through Australia. Watch out for the next post on what to do in and around Darwin when you’re not dancing tango!