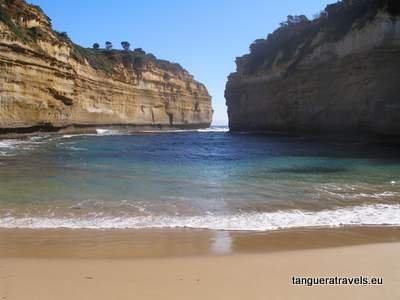 This was my second trip to Melbourne. The first time I stayed for almost a week and had time to explore the city and surroundings. The second time I had less than 48 hours and I spent quite a bit of my time dancing tango. This post is about what I saw and did during both trips. Melbourne is a great city for getting around on foot, so a good way to start your trip is going for a wander around the centre with no particular destination in mind. Even someone like me, who still manages to get lost in the city I’ve been living in for more than 5 years, didn’t get lost in Melbourne. Bourke Street Mall (between Swanston and Elizabeth Streets) and the surrounding streets form the city centre’s main shopping hub. If shopping is not your thing, it’s also fun to explore the laneways, admire the street art, stop for a coffee and watch the world go by. For getting around you can make use of the City Circle Tram. Thîs free service operates during business hours, with an extended service from Thursday to Sunday (until 9pm). The route runs around the CBD. You can view a list of the stops here.

You’ll probably pass by Federation Square at some stage during your visit. The futuristic architecture contrasts with the neo-classical Flinders Street Station across the road and the nearby St Paul’s Cathedral and on a sunny day it’s a nice if noisy spot to sit around and figure out your next move. Like many places around the centre there is also free wifi available. This is where you’ll find the visitors’ centre which organises free tours of the square every day except Sunday, as well as two museums, the Ian Potter Centre: NGV Australia , a collection of indigenous and non-indigenous Australian art, and the Australian Centre for the Moving Image. Entrance to both is free. For prices for the ACMI’s the cinema programmes or other special events check the calendar available here.

Just down the steps behind Federation Square you can go for a walk along the banks of the Yarra River where there are also some bars and restaurants. River cruises also leave from here.

A pleasant way to spend a morning in Melbourne is with a wander around the Queen Victoria Market. Open every day except Mondays and Wednesdays, it’s huge so you might even want to go more than once! If you have half a day for exploring outside the city ….

If you are only on a short visit to Melbourne but don’t want to miss out on the beach, St Kilda’s is your best option. It’s about 20-30 minutes by tram from Melbourne CBD. For nice views with your afternoon coffee head for the kiosk at the end of the Pier. More useful information on public transport options for getting to St Kilda and what to do there here. Alternatively, if you have more time, have a look at this blog for beach inspiration around Melbourne.

If you have one full day for a trip outside Melbourne … … then it has to be along the Great Ocean Road. With spectacularly beautiful coastal views, this 243km stretch of road is also the world’s longest war memorial – it was built by returning soldiers and dedicated to those killed during the first world war. It’s a very long day trip from Melbourne (the trip we did lasted about 12 hours altogether), but it’s worth it. Obviously if you have the time, the more relaxed way is to take your time, go one way leaving either from Melbourne or Adelaide, making stops along the way. Ideas for what to do and where to stay here.

And one last idea for a (half) day trip from Melbourne…

During my first trip to Melbourne we also did an evening tour to Phillip Island to see the little penguins’ parade at sunset. There is also a Koala Conservation Centre as well as the country’s largest fur seal colony. You can drive there in about 90 minutes from Melbourne, just remember… What’s your favourite thing to do in Melbourne? I’d love to hear from you in the comments below!